The steamboat Forest Rose suffered a disastrous boiler explosion on March 31, 1857, on the Mississippi River near Napoleon (Desha County), resulting in several deaths.

The Forest Rose was a 205-ton sternwheel paddleboat built in 1852 in California, Pennsylvania, for Captain Francis Maratta of Beaver County, Pennsylvania. The vessel, which was 154 feet long and 28.5 feet wide and had a five-foot draft, initially ran between Pittsburgh, Pennsylvania, and St. Louis, Missouri. By 1857, Captain Richard Allen of Paducah, Kentucky, owned the Forest Rose and was running the steamboat along the Mississippi River and its tributaries.

The Forest Rose was heading up the Mississippi from New Orleans, Louisiana, with a full cargo load bound for Little Rock (Pulaski County) and Fort Smith (Sebastian County) on the Arkansas River when its boilers exploded around 1:00 p.m. on March 31, 1857, about two miles below Napoleon. The cabin’s forward portion was “blown to atoms,” and a smokestack collapsed across the forecastle. Several people were blown overboard in the explosion.

David Thompson, the Forest Rose’s first engineer, was pinned beneath the fallen chimney, and efforts to free him failed as the steamboat sank to the level of its hurricane deck, drowning him. Other people were trapped below decks and died in the sinking boat.

The explosion was plainly heard in Napoleon, and several people jumped into skiffs and began rescuing people from the waters of the Mississippi, while the steamboat Arkansas set out to assist. The Forest Rose’s yawl also was used to rescue victims of the catastrophe from the river. Survivors were placed aboard the Arkansas, which took them to Napoleon, and the injured were taken to the marine hospital there.

Eight people—including Captain Allen’s teenaged son—died in the explosion, and at least two others perished at the marine hospital from their injuries. Rumors spread that Allen had built up too much steam and caused the boilers to burst, leading the Arkansas Gazette to write: “It is said that he urged his engineer to crowd more steam on, though they were carrying 200 pounds! A man who would thus sport with human life must be own cousin in blood to the devil himself.” 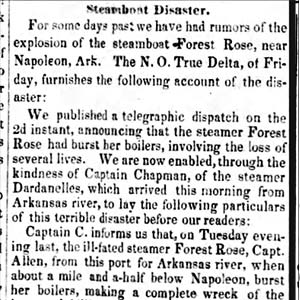 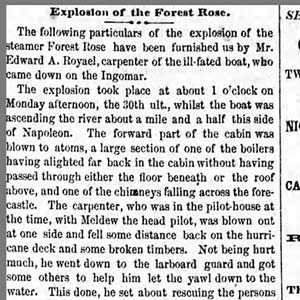 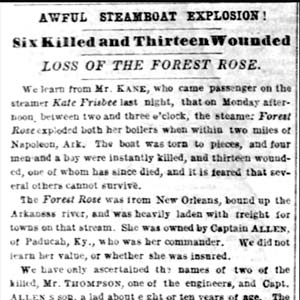