In the Arkansas election of 1888, Agricultural Wheel members and other groups formed the Union Labor Party and allied with the Republicans to offer a serious challenge to the Democrats. In 1889, the Featherstone v. Cate congressional hearings resulted from allegations of election fraud in the race for U.S. representative from Arkansas’s First Congressional District, a district comprising seventeen eastern counties including Craighead, Crittenden, Cross, Lee, Phillips, and St. Francis.

In 1888, the race for first district representative pitted Independent candidate Lewis P. Featherstone of Forrest City (St. Francis County) against Democratic judge William Henderson Cate of Jonesboro (Craighead County). Initially, the election results showed Cate the winner with 15,576 votes to Featherstone’s 14,238. In late November 1888, Featherstone, alleging fraud in Crittenden, Cross, Lee, Phillips, and St. Francis counties, announced his contest of the election. Among those counties where Featherstone alleged fraud, only in Cross did Cate receive a majority of votes over him. Featherstone garnered a majority of votes over Cate in St. Francis County, as well as in the black-majority, heavily Republican counties of Crittenden, Lee, and Phillips. Featherstone apparently believed that his margin would have been larger had election fraud not occurred.

The Republican-controlled U.S. House of Representatives held the case hearings in 1889. A majority of the House Elections Committee ruled that there was “[sufficient] evidence…to establish a conspiracy to defraud in Crittenden County,” citing a pre-election purge of the African-American Republican county officers. In July 1888, the white Democratic Crittenden County sheriff had led a group of armed whites who gained control of the county government by forcibly removing the black Republican county officers from office. State election law required the county court to appoint three election judges, representing different political parties, to preside over elections in each township. The House committee ruled that the July purge enabled the Crittenden County Democrats to appoint all Democratic election judges. In November 1888, the Democratic election judges in Crittenden County utilized fraudulent ballot boxes in the heavily Republican Scanlin, Cat Island, and Crawfordsville townships and held no elections in the Idlewild and Furgeson townships. The House committee also cited voting irregularities in Phillips County, which further reduced Cate’s majority over Featherstone.

In his notice of contest, Featherstone, noting that he received only eighty-nine votes to Cate’s 224 in Lee County’s Independence Township, alleged that the Democratic election officers there had committed fraud. The House committee reported that, after giving testimony, a witness from Independence Township was “arrested for perjury and placed under $1,000 bond to answer to the state court.” Cate’s lawyer then claimed that he would have arrested anyone he believed to have testified falsely on Featherstone’s behalf. Accusing Cate’s lawyer of witness intimidation, the House committee ruled that Cate “must lose 224 votes returned for him, and [Featherstone] must be allowed 3 more votes than were returned for him.”

In his home county of St. Francis, Featherstone alleged that the Democratic election officers in Franks Township had committed fraud. He also alleged fraud in St. Francis County’s Blackfish Township, where no election was held in November 1888. In 1888, tension was high between Democrats and Union Laborites in the county. During the September 1888 election, three black Republicans and three white Union Laborites had won the county offices, and a shooting in the heavily black Franks Township had wounded a group of politically active Democrats.

Finally, the House determined that Featherstone was elected representative by a majority of eighty-six votes, and he was seated in Congress in March 1890. The outraged Democratic Arkansas Gazette insisted that Featherstone “now sits in Judge Cate’s seat…and is probably mentally the weakest man ever admitted to a seat in Congress.” While in Congress, Featherstone earned even more enmity among Arkansas Democrats when he voted for the hated Lodge elections or “force” bill, which would have authorized federal supervision of southern elections to ensure that African Americans voted freely.

In 1890, Featherstone ran for reelection to Congress as a Union Laborite. He lost to Cate, although—as in 1888—he garnered a majority of votes in Crittenden, Lee, Phillips, and St. Francis counties. In November 1890, the Arkansas Gazette happily announced that “all Jonesboro is wild with enthusiasm tonight over [Cate’s] great victory.”

The Featherstone v. Cate hearings, by highlighting the extent of election fraud in Arkansas, testified to the seriousness of the interracial third-party challenge to Democratic dominance in the late nineteenth century.

For additional information:
Biennial Report of the Secretary of State of the State of Arkansas, September 30, 1890. Little Rock: Press Printing Company, 1891.

Biennial Report of the Secretary of State of the State of Arkansas, September 30, 1892. Little Rock: Press Printing Company, 1893. 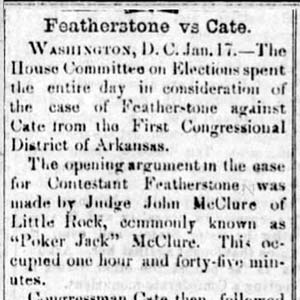