The Everton School at Everton (Boone County), located on the corner of Main and Hill streets, was built in 1939 with assistance from the Works Progress Administration (WPA), a Depression-era federal relief program. It was listed on the National Register of Historic Places on September 10, 1992.

The first school in Everton, which was founded after the Missouri and North Arkansas (M&NA) Railroad laid its lines through Boone County, was built in 1903, ten years before the town incorporated. The wood-frame building burned and was replaced with a brick building in the late 1910s. That school served until 1938, when it was razed, and materials were salvaged to go toward a new building on land donated by John Potts.

The WPA supplied $1,730 to provide labor and materials for construction of a new school at Everton, but local volunteers donated their skills as electricians, plumbers, and stonemasons for the project. When a Springfield, Missouri, woodworking mill submitted a bid of $1,500 for windows and doors, a Mr. Martin and Finis Robertson instead built all of the finished woodwork on site by hand. The local Parent-Teachers Association raised $300 for the construction through several entertainment projects.

The Everton School was completed in April 1939, and the finished structure was a single-story, rectangular building designed in a vernacular interpretation of the Craftsman style of architecture and distinguished by a projecting central entrance bay. The fieldstone-veneered building featured six classrooms and a large auditorium.

The Everton School was dedicated on April 27, 1939, with a ceremony featuring a string ensemble and speeches by Judge Garner Fraser of Clinton (Van Buren County) and Floyd Sharp, Arkansas’s WPA administrator. The school served area students until the Everton School District was consolidated with those of Bellefonte (Boone County) and Valley Springs (Boone County) in 1948. The building was sold to a Methodist congregation, which still uses the building in the twenty-first century. 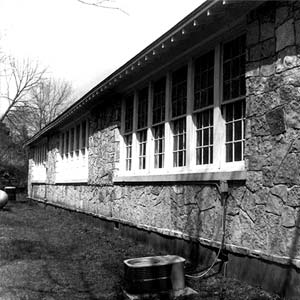