The Engagement at Plum Point Bend was fought on May 10, 1862, as the rams of the Confederate River Defense Service attacked the U.S. Mississippi Flotilla, whose vessels were shelling the Confederate fortifications at Fort Pillow, Tennessee. Two U.S. gunboats were sunk during the spirited engagement.

Following the capture of Island No. 10 on the Mississippi River on April 8, 1862, the U.S. Mississippi Flotilla continued downstream to Cape Girardeau, Missouri, and then to an area between Plum Point on the Tennessee side of the river and Craighead Point near Osceola (Mississippi River) on the Arkansas side, from which the fleet’s mortar boats could pound the extensive Confederate works at Fort Pillow.

The USS Cincinnati towed Mortar Boat No. 16 to a position near Craighead Point at 5:00 a.m. on May 10, 1862, and the latter vessel began launching shells toward Fort Pillow an hour later. The gunboats USS Benton, USS Carondelet, and USS Pittsburg were anchored on the Tennessee side of the river, while the USS Mound City, USS St. Louis, and USS Cairo berthed on the Arkansas side. The rest of the Union fleet was anchored upriver.

At around 6:30 a.m., the Confederate River Defense Fleet, consisting of paddlewheel steamboats equipped as rams and armored with cotton bales and defended by troops of the Missouri State Guard, steamed into view from the south, with the General Bragg in the lead followed by the Sumter, General Price, flagship Little Rebel, General Van Dorn, General Lovell, and General M. Jeff Thompson, all intent on attacking the mortar boat and the Cincinnati. Four of the Union gunboats did not have their steam up, but the Carondelet and Mound City moved downriver to defend their fellow vessels.

The Cincinnati steamed forth and opened fire on the General Bragg, which passed the Union vessel and then turned and rammed it on its starboard quarter, smashing into and flooding its shell room. The Cincinnati’s gunners unleashed a broadside at the Bragg, killing a man and severing the Bragg’s tiller rope, removing the boat from the action. The General Price and Sumter also rammed the stricken Union gunboat, which sank near the Tennessee side of the river to the level of its hurricane deck, on which the Federal sailors sought refuge.

The General Van Dorn engaged with the mortar boat until the Mound City steamed within range, and then rammed the Union vessel, almost shearing off its bow. As the captain of the Mound City ran the sinking vessel aground on the Arkansas shore, the Benton and Carondelet opened fire on the Confederate fleet, whose commander, Captain James E. Montgomery, ordered it to fall back to the protection of Fort Pillow’s guns, ending the engagement.

While the engagement at Plum Point Bend was a Confederate victory, the two sunk Union gunboats were quickly repaired, with the Mound City back in action on May 22 and the Cincinnati rejoining the fleet during the first week of June. Chastened by the damage inflicted by the Confederate rams, the Union navy modified its ironclads for better protection against such vessels. The two forces would meet again at Memphis on June 6, 1862, resulting in the destruction of the Confederate fleet and Union control of the Mississippi River north of Vicksburg, Mississippi.

The Cairo was sunk later that year in the Yazoo River. In the 1960s, the wreck was located through the efforts of historian Ed Bearss and salvaged from the river, and it was put on display at the Vicksburg National Military Park.

For additional information:
McCaul, Edward B., Jr. To Retain Command of the Mississippi: The Civil War Naval Campaign for Memphis. Knoxville: University of Tennessee Press, 2014. 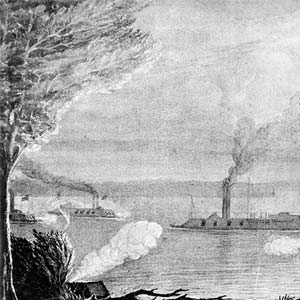 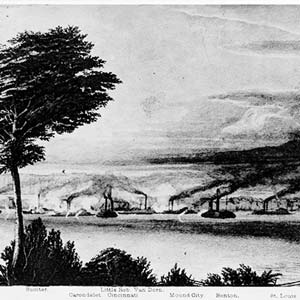