On June 13, 1918, an African-American farm worker named Elton Mitchell (referred to in some reports as Allen Mitchell) was hanged by a mob in Earle (Crittenden County). Newspaper reports give different dates for Mitchell’s murder, including June 22, June 13, and June 14, but the Pine Bluff Daily Graphic reported on June 14 that the murder took place on Thursday, June 13, so that is the most probable date.

Mitchell’s personal history is a bit confusing, with public records placing him in several adjacent counties in northeastern Arkansas and northwestern Mississippi. At the time of the 1900 census there was an Etten Mitchell, age ten, living in Tyronza (Poinsett County) with his parents, Andrew and Parthenia Mitchell, and five siblings. On November 2, 1912, a twenty-three-year-old Elton Mitchell married May Lattie Johnson in neighboring Cross County. Both were residents of Earle. An African-American man named Elton Mitchell registered for the World War I draft in nearby DeSoto County, Mississippi, between 1917 and 1918. His registration card indicated that he was born on November 29, 1890, in Crawfordsville (Crittenden County).

The Graphic reported that on June 12, Mitchell had shot and wounded the wife of W. M. Langston, a “prominent planter.” This is probably Earle resident William Monroe Langston, a farmer who registered for the draft in Crittenden County on September 12, 1918. His wife was listed as Peachie Maude Langston. According to the Graphic, Mitchell approached the Langstons in their garden to discuss a dispute over plowing. He was armed with a revolver, and when Maud Langston tried to run into the house, he shot her in the hip. W. M. Langston then got a shotgun, and the two exchanged fire. Mitchell’s shots missed, but Langston managed to wound him. Mitchell then ran to the farm of a black planter near Grassy Lake, three miles from Earle. The planter advised him to hide in the woods and then went to Earle and told the authorities where he was. On June 13, a posse approached Mitchell’s hiding place, and he fired on them. They returned fire, killing him. Maud Langston was expected to live, which she apparently did. By 1920, she was living in Earle with her husband, who worked as a salesman in a retail store.

On June 22, 1918, the Chicago Defender, an African-American newspaper, published a story with a different and much more sensational account of the situation. According to their account, Mitchell had refused to work for the Langstons without pay. As a consequence, a “mob composed of prominent white citizens of this city” captured Mitchell, whose “body was hacked into bits with butcher knives before it was strung up to a sycamore tree.” The account called it “the act of cannibals.” The Defender noted that no investigation was done, and no one was arrested, despite the fact that members of the mob were well known. The article’s conclusion noted that “from all indications a Kuklux [sic] movement has been initiated in this section.” 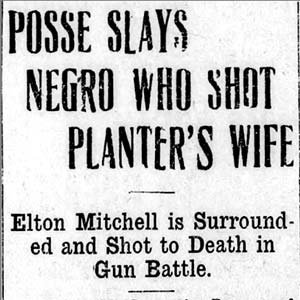