Elligin and Anderson (Lynching of)

Two African-American men named Elligin and Anderson were lynched in September 1877 near DeWitt (Arkansas County) for the alleged crime of murder. This was the third lynching event to occur in Arkansas County.

The two men lynched were likely Jordan Elligin and George Anderson. The 1870 census records both men living in Villemont township in Arkansas County (the township would be annexed to Jefferson County in 1889). Elligin was fifteen at the time of the census, while Anderson was twenty-four and working as a farmer.

An account of this event appeared in the Indicator, a newspaper published in DeWitt. According to this account, published on Saturday, September 22, and reprinted in the Arkansas Gazette, Elligin and Anderson had been confined to the county jail on a charge of murder. No motive for their alleged crime was presented. On Friday night (or early Saturday morning), at 12:00 or 1:00 a.m., “a party of men estimated from 9 to 175 came to the jail, and by threats and force of arms succeeded in getting possession of the two negroes.” The mob tied the men’s hands behind their backs, as well as placing ropes around their necks, before heading westward out of town. Rather unconvincingly, this report also states that “nearly every family living in the neighborhood of the jail heard the commotion at the jail, but as no alarm was given, they did not know the cause.”

The following morning, Deputy Sheriffs L. C. Smith and James Gunnell “went out in pursuit and found the negroes with their throats cut and hanging to a tree north and near the farm of Smith and Herrell.” A grand jury, headed by the acting coroner, was apparently convened to investigate, but there are no reports that anyone was indicted for their role in the murder.

National reports offer some more-detailed information regarding this event. For example, the Public Ledger of Memphis, Tennessee, asserts that the two men had been lynched for the murder of Thomas B. Stockley of Willamette (Jefferson County). This report gives the size of the mob as nineteen men and relates that they managed to get into the jail by rolling an empty wooden keg “against or under the building” and managed to get the guards to flee by pretending that it was a keg of gunpowder and that they were about to light a fuse. The Public Ledger compared this lynching to one that had previously occurred in Ohio, writing that the murder occurred at night and in secrecy because “DeWitt is in a county which is overwhelmingly negroized and Radical.”

“Compiled from Our Exchange and Correspondence.” Arkansas Gazette, September 30, 1877, p. 3. 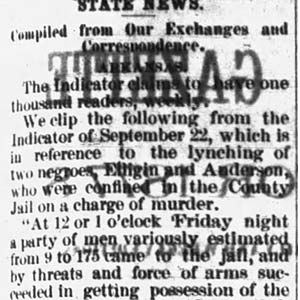