On November 6, 1873, George Alexander “Dock” Eagle, his son Will, and his nephew Robert J. (R. J.) Eagle were murdered in Lonoke County, allegedly by a group of African Americans. Some newspapers erroneously described the murders as a lynching.

The Eagles were members of a prominent local family. George “Dock” Eagle was the uncle of William H. Eagle (one of the county’s wealthiest landowners and a member of the Arkansas General Assembly) and the brother of James P. Eagle, who served both in the Arkansas legislature and as Arkansas governor. Dock Eagle was born in North Carolina in 1826 and was the son of Joseph and Rosanna “Sena” Furr Eagle. According to the census, in 1870, he was living in Pulaski County with his wife Serena and his eighteen-year-old son William (the same Will that was murdered). Robert J. Eagle was twenty-two in 1870 and was living in Lonoke County with his mother, Charity C. Eagle.

According to the Arkansas Gazette, in early November 1873, Dock, Will, and R. J. Eagle went bear hunting with a man named Dock Gray and another man identified only as Sullivan, who was probably James Sullivan. They lost some of their dogs near the Shall place in neighboring Pulaski County, and while Dock and Robert Eagle and Dock Gray went back to camp, Sullivan and Will Eagle set out to find the dogs. As they were searching, they encountered two armed African-American men carrying four hogs on their horses. When asked whose hogs they were, the men refused to say, and as Sullivan and Will Eagle moved toward them, they ran into the brush, abandoning the swine. According to the Nashville Union and American, the two escapees told the largely African-American neighborhood that they had been attacked by the Ku Klux Klan and raised a group of about thirty people to defend themselves.

Sullivan and Will Eagle took the hogs to the nearby home of a man identified only as Squire Sullivan (probably James Sullivan’s father) and, upon examination, found the hogs to have Sullivan’s mark on them. Squire Sullivan issued writs for the arrest of the two Black men, and as there was no constable in the area, he gave them to R. J. Eagle to serve. R. J. Eagle deputized Dock Eagle, Dock Gray, James Sullivan, and Will Eagle and went to the nearby Forbes place near the Lonoke/Pulaski county line, where they found the group of armed African Americans. When threatened with arrest, the Black group replied that “they could not be arrested with five hundred men.” Members of the posse dismounted, upon which Black men hiding in the corn cribs began firing from ambush. Dock, Will, and R. J. Eagle were killed instantly, and Sullivan was wounded. Dock Gray escaped unscathed and set out for Lonoke (Lonoke County), where he informed Lonoke County Sheriff J. M. McClintock of the attack. McClintock assembled a posse that included J. P. Eagle, but because of the unfamiliar route they did not arrive at the crime scene until 11:00 that night. When they approached the bodies, they found that Will Eagle had been shot twenty-nine times, and that the men’s guns, horses, and equipment had been taken. They went to the Forbes place and found no one there. Fearing further violence, they took the bodies back to Lonoke for an inquest.

According to the Gazette, a man named Kirby from Pulaski County had also organized a posse to help in the search for the perpetrators. When he returned to Little Rock (Pulaski County), it was discovered that one of his men, identified only as Conner, was riding Will Eagle’s horse. Pulaski County Sheriff W. S. Oliver turned it over to J. P. Eagle. Eagle also thought that Kirby possessed Dock Eagle’s rifle. A man from Ashley Township claimed to have talked to one of the African Americans who had participated in the murders, and who claimed to have killed two members of the Eagle family. It was hoped that this would help in the apprehension of other members of the gang. Governor Elisha Baxter, when told of the situation, promised to do anything in his power to capture the killers and bring them to justice.

The following day, the Gazette updated its story. According to new information, James Sullivan and Dock Gray had actually tried to escape the ambush and were shot while running down the road. They escaped to the woods, but Sullivan was so badly wounded that Gray left him and ran to Squire Sullivan’s. Shortly after Gray arrived at the squire’s home, young Sullivan, exhausted, managed to drag himself there. His wounds were not considered life threatening. By November 8, Deputy Sheriff D. C. Adams had eight men in custody for the murders. The suspects were Andy Morgan, Marsh Blakely, Jacob Evans, Samuel Sullivan, Brown Madison, Jerry Harrington, Zack Harrington and Silas Turner. They were jailed pending the empanelment of a grand jury.

Detailed information is limited on what eventually happened to the alleged perpetrators. One of them may have been lynched four years later. According to the July 5, 1877, edition of the Milan (Tennessee) Exchange, on June 24, three masked men took from custody in Lonoke an African-American man, identified only as Green, who was allegedly involved in the murders, and shot him.

Further tragedy befell the Eagle family in 1884. According to the Arkansas Democrat, Dock Eagle’s fifteen-year-old son, George, went hunting in late November of that year with several other members of the Eagle family and a man named Will Mason, the son of former Lonoke merchant George Mason. George Eagle and Will Mason remained in camp while the rest of the party went out to hunt. Will Mason left his gun leaning against the rear of their wagon while he went to make an adjustment in the front. George Eagle was also leaning against the back of the wagon, and when the wagon jostled, the gun discharged. The bullet hit George in the side, killing him. George is buried at the Whitley burial ground near Cabot (Lonoke County) near the victims of the murders.

The Eagle family once again made the news in April 1898. Apparently, they had been in a long-standing feud with Lonoke merchant W. K. Booe. According to a report in the Monticellonian, “In the early days of Lonoke county both the Booes and Eagles displayed their bravery, and figured in a number of tragedies where the Winchester and six-shooter were used with deadly effect.” While the Eagle family was prominent and respected, the Booe family was regarded as violent. When Booe’s son Charley was wounded in an ambush near England (Lonoke County), the Booe family accused a member of the Eagle family. W. K. Booe, Charley Booe, and another son, W. H. Booe, went to Lonoke to avenge the crime. They were met by the Eagles, who began to shoot, killing all three of the Booes. A grand jury was empaneled, but it declined to indict the Eagles for murder, instead opting for second-degree murder. All were eventually acquitted.

Civil War through Reconstruction, 1861 through 1874
Law 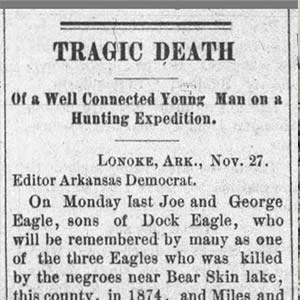