Donna Axum was born in 1942 in El Dorado (Union County) to Idelle and Hurley B. Axum. Her father was a banker. She said she began entering beauty pageants because, as a young person, she had an inferiority complex about being too thin and not having “a figure.” She was determined to work at improving herself and enhancing her feeling of self-worth. She won her first title, Miss Union County, in 1958 as a high school senior in El Dorado when she was sixteen.

After entering the University of Arkansas (UA) in Fayetteville (Washington County), her sorority, Delta Delta Delta, nominated her for Miss University of Arkansas. She finished as second runner-up. While at UA, she worked summers in her father’s bank to earn money to buy her pageant wardrobe. She was a founding member of the UARKettes singing group and worked to improve her figure, talent, and personality. She then entered and won the Arkansas Forestry Queen competition.

In the summer of 1963, as a rising senior at UA, she entered the Miss Arkansas pageant, winning the swimsuit and talent competitions. At the final ballot, there was a tie for first place, but Axum had two more points in the talent portion and was awarded the title, which took her to Atlantic City, New Jersey, for the Miss America Pageant. She was crowned Miss America 1964 (Pam Jackson replaced her as Miss Arkansas). Using her Miss America scholarship, she returned to UA, completed her BA in speech and drama in 1966, and was a graduate teaching assistant there before receiving her MA in speech and drama in 1969.

In her studies, she emphasized television and public speaking, a background that served her well as she embarked on her career. She taught speech at Texas Tech University in Lubbock and Blinn College in Brenham, Texas. She presented seminars on beauty and women’s issues and appeared on television shows such as KATV’s Good Morning Arkansas, and she produced and co-hosted the Noon TV show in Austin, Texas, in the 1970s.

In 1984, she married J. Bryan Whitworth, former executive vice president of ConocoPhillips (she had previously been married to Michael Buckley, with whom she had a child, and Gus Mutscher). She and Whitworth lived in Fort Worth, Texas; combined, the couple had five children and ten grandchildren.

She was named one of UA’s Distinguished Alumni in 1988 and was named to the Fulbright College of Arts and Sciences Distinguished Alumni Academy in 2000. She was a Charter and Gold member of the UA Chancellor’s Society and the National Development Council, a volunteer organization that supports UA in developing and strengthening its academic and research programs. She served on the Arkansas Alumni Foundation and the Arkansas Alumni Association Board of Directors and was a life member of the UA Alumni Association. She established an endowed scholarship fund for UA students who graduate from Arkansas high schools and show financial need. She served the university on the Executive Committee for the Campaign to Restore Old Main and the steering committee of its Campaign for the Twenty-First Century, founding the Women and Philanthropy Committee.

Her $250,000 gift led to the creation and dedication in 2003 of the 10,000-square-foot Donna Axum Fitness Center in UA’s Health, Physical Education, and Recreation Building. Her sorority’s national organization named her one of the “Top 100 Tri Deltas in the First 100 Years.”

Axum authored the books The Outer You … The Inner You and How to Be and Look Your Best Everyday: A Comprehensive Guide from a Former Miss America. In 2004, she became the first Miss America to be elected to the Miss America Organization’s board of directors.

For additional information:
Axum, Donna. How to Be and Look Your Best Everyday: A Comprehensive Guide from a Former Miss America. Waco, TX: Word Books, 1978.

Bivans, Ann-Marie. Miss America: In Pursuit of the Crown: The Complete Guide to the Miss America Pageant. Sandy, OR: Mastermedia Publishing, 1991. 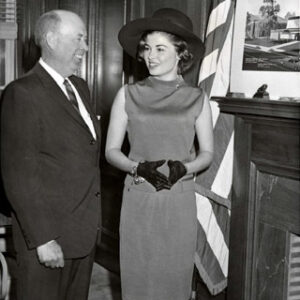