The Craighead County Courthouse is a Depression-era, Art Deco–style building situated on the courthouse square in Jonesboro (Craighead County). It was listed on the National Register of Historic Places on September 11, 1998.

During the first year after the establishment of Craighead County and the city of Jonesboro in 1859, there was no courthouse for carrying out the official business of the western part of the county. (Along with Jonesboro, Lake City also acts as a county seat, serving the eastern part of the county.) The Arkansas General Assembly designated the home of William Puryear in Jonesboro as a temporary county seat.

The first permanent courthouse was a two-story frame building erected on the town square in Jonesboro in 1862. The building remained the center of county government until it burned in 1869, destroying all county records. The townspeople blamed the fire on the state militia, which was stationed at the courthouse the night before the fire. A second courthouse was established in a store west of the square. Sometime around 1876, the store burned, and once again the county records were destroyed. The cause of the fire was determined to be arson. A third courthouse was erected on a lot west of the square. In 1885, it too was destroyed by fire. This fire prompted the townspeople to build a two-story courthouse with fireproof storage vaults for keeping records on the first floor, with a courtroom and jury rooms on the second floor. This fourth courthouse was built with a four-story clock tower and was completed in the summer of 1886 by W. C. Clark, a Little Rock (Pulaski County) contractor, at a cost of $16,500. The building survived a fire in 1889 that destroyed several surrounding Main Street businesses. The two-story building was demolished in 1933 to make way for the construction of the existing courthouse.

The current building is the fifth courthouse on this site. Construction of the current Craighead County Courthouse began on June 13, 1934, and was completed on March 31, 1935, by the Public Works Administration (PWA) as part of the New Deal. The structure is a brick building decorated with vertical limestone panels containing floral patterns and horizontal limestone with carvings of a wing motif at each corner. The courthouse features a flat roof, recessed front porch, and an interior chimney made of cut-stone.

A brick skywalk, constructed in 1995, connects the second story to a four-story courthouse annex on Union Street. The windows installed in the skywalk and the annex match the style of double-hung windows in the main courthouse building.

Various markers and monuments adorn the courthouse lawn, including a sculpture of an “American Doughboy” displayed at the northeastern corner of the courthouse lawn. The statue represents one of the first monuments built in the South and is one of the first in America erected to commemorate World War I veterans. On the southeastern corner of the lawn is a metal marker commemorating the organization of the county in 1859.

Stuck, Charles A., The Story of Craighead County. Jonesboro, AR: The Hurley Company, 1960. 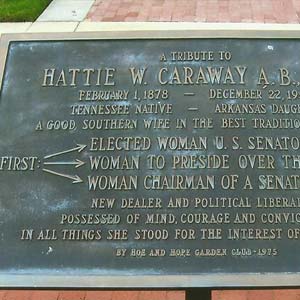