The steamboat Clermont No. 2 sank after hitting a snag on the White River near Augusta (Woodruff County) on December 4, 1851, killing twenty-two passengers.

The Clermont No. 2 was a 121-ton sidewheel paddleboat built in Cincinnati, Ohio, in 1845. Owned by a Captain Collins, the Clermont apparently usually ran on the St. Francis River but was traveling on the White River in late 1851. The steamboat hit a snag and sank in late September but was quickly raised and put back into service.

The vessel had a far more serious accident in December. The Clermont No. 2 steamed away from Augusta on December 3, 1851, bound for Jacksonport (Jackson County) with nine cabin passengers and twenty-six deck passengers. At around 1:00 a.m. on December 4, the steamboat struck a snag when about eighteen miles above Augusta, and, as a passenger wrote, “sunk in less than two minutes, to half way her upper Cabin [sic].”

Twenty-two of the twenty-six deck passengers—including three families—drowned in the disaster, and the survivors were brought to shore, “wet and cold,” where they remained for two days before being taken to Augusta. The passenger who wrote of the sinking of the Clermont No. 2 blamed the ship’s engineer “for not being at his post; had he been there, and stopped the engine at the ringing of the bell, the boat might have been saved.”

Three years later, in July 1854, salvagers using the diving bell Stingaree pulled the machinery “in good order” from the wreck of the Clermont No. 2.

The Clermont No. 2 catastrophe provides another illustration of the dangers of steamboat travel in Arkansas waters in the nineteenth century, where encounters with snags also caused mass casualties on the Belle Zane in 1845, the John Adams in 1851, the Cambridge in 1862, the B. M. Runyan in 1864, the Mercury in 1867, the G. A. Thompson in 1869, and the Nick Wall in 1870. 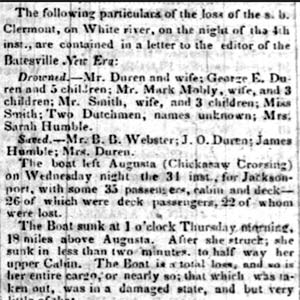