aka: Bunch (Lynching of)

According to the Arkansas Gazette, an African American identified only as Bunch was hanged in Chicot County in August 1836. The incident was also reported in a number of newspapers across the United States.

According to the Gazette, Bunch, perhaps a member of the free black population in Chicot County, attempted to vote, but the judges turned him back because he was black. Bunch “took umbrage” at this and “resorted to violent measures.” In the midst of the fracas that followed, one Dr. Webb, “a highly respectable citizen,” was stabbed multiple times and was expected to die. Local citizens were so incensed that they promptly hanged Bunch. The Indiana American, quoting the Louisville Journal, reported that Bunch had a copy of “a life of Col. Johnson” in his pocket when he died. This may refer to William Emmons’s 1833 biography of Richard Mentor Johnson, a Kentucky congressman who served as the ninth vice president of the United States (and whose relatives owned land in Chicot County), and indicates that Bunch was likely literate.

Public records give little relevant information on anyone named Bunch who lived in Chicot County at the time. John Bunch paid taxes in Chicot County in 1831, but the record gives no indication of his race. Dr. Webb, however, was well known in the community. Albert W. Webb, usually known as A. W. Webb, was in Chicot County as early as 1834. He did not die of his wounds in 1836, and he served as county treasurer from 1836 to 1840. He served as county judge from 1840 to 1842. In 1844, he moved to Little Rock (Pulaski County), where he was a prominent doctor and owned the Arkansas Gazette for a short time. He also served on the city council.

Ironically, Dr. Webb did apparently die at the hands of African Americans. He and his teenage son were robbed and murdered in their Little Rock home in June 1866. Three African Americans, including Webb’s manservant and two soldiers from the Fifty-Fourth U.S. Colored Infantry, were tried and convicted of the crime. The charges against three white men, who were supposedly complicit in the crime, were dismissed. 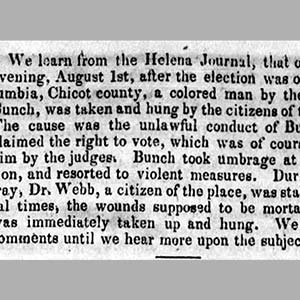