In October 1878, a posse pursued a pair of southwestern Missouri horse thieves into western Carroll County and hanged them.

Franzisca Haneke Massman, the thrice-widowed owner of a major sawmill operation in western Carroll County, observed two horsemen riding through her property on October 26, 1878. They were soon followed by six other riders who appeared to be pursuing them. Massman, incorrectly identified as “Mrs. Masmer” in newspaper accounts, left on horseback about half an hour later to check on some of her lumbermen on the far side of a mountain near her mills.

As she topped the mountain, she “espied in the shadow of a giant pine eight men whom she recognized as the two former and the six latter who had a short time before passed her mill in such apparent hurry.” The men were in “a very earnest conversation” as she approached, according to newspaper reports, but grew quiet as she approached, “showing that their words were not intended for her ears.”

Massman spent around two hours with her workers before heading back toward the mill and at first saw nothing when she came to the area where she had earlier seen the eight men, “but on casting her eyes upward, she…was horrified upon seeing two bodies dangling at a rope’s end full twenty feet from the ground.” Local authorities cut the bodies down and buried them, but no one apparently ever identified the victims “except that they were Southwest Missouri horse-thieves and had been lynched by indignant citizens for their crimes.”

News of the Carroll County lynchings, reported in the Arkansas Gazette under the headline “Arkansas Justice: How They Square Accounts with Horse Thieves in Arkansas,” was published in newspapers in South Carolina, Indiana, Delaware, Wisconsin, Pennsylvania, New York, and Missouri among others in October and November 1878.

It is uncertain precisely where the murders took place, as Franzisca Massman owned thirty-two homestead or cash entry claims in western Carroll County, but at least four of them were on Grindstone Mountain, which may be the site referenced in the articles. The members of the lynch mob were apparently never identified or prosecuted. 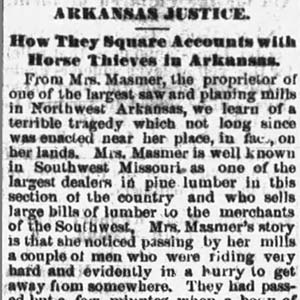