The Caroline was a steamboat that caught fire while traveling up the White River on March 5, 1854, and sank, with forty-five passengers and crew members losing their lives in the disaster.

The Caroline was a 150-ton sternwheel paddleboat built in Pittsburgh, Pennsylvania, in 1853. The vessel was 134 feet long and twenty-four feet wide with a draft of 3.5 feet.

The Caroline left Memphis, Tennessee, on March 4, 1854, with a full load of cargo and passengers, many of whom were immigrant families. The steamboat was in the White River about twenty miles from its mouth on the afternoon of March 5 when a wood pile near the boilers caught fire, soon enveloping the entire boat in flames.

The fire spread rapidly, and around fifteen people crowded into the Caroline’s yawl, which promptly foundered; all of them died. John Trice, the pilot, deliberately drove the steamboat onto the shore, perishing in the flames in the process. Many people, including Captain James Creighton, jumped overboard and drowned in the White River.

A newspaper noted that “there were many deck passengers, almost all of whom were lost. The principal sufferers were women and children, who not being able to get around with the same alacrity as the men, perished either in the flames or in the water.” One account said that a widow and her thirteen children all died in the disaster.

The Caroline burned to the waterline before it slipped back into the river and sank. The wreck rose from the water briefly, bow foremost, before breaking in two and sinking in thirty feet of water, taking the safe holding $5,000 with it. The loss of the Caroline and all of the cargo aboard was valued at $150,000; the $12,000 steamboat was insured for $5,000. Forty-five people died in the burning of the Caroline.

The Caroline catastrophe provides another example of the dangers of steamboat travel in Arkansas waters in the nineteenth century, when fires aboard the wooden vessels also caused mass casualties on the Brandywine in 1832, the Webster in 1851, and the Mary E. Poe in 1873. 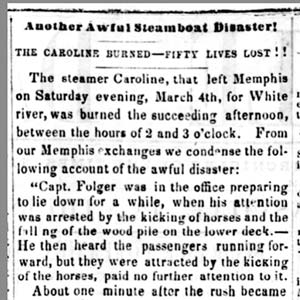 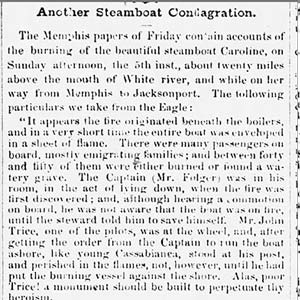