The Car of Commerce was a steamboat that burst a boiler north of Osceola (Mississippi County) on May 14, 1828, killing at least twenty-one passengers and crew members.

While heading from New Orleans, Louisiana, to St. Louis, Missouri, an engineer on the Car of Commerce shut down the vessel’s engines briefly around 10:00 a.m. on May 14, 1828, at an area on the Mississippi River known as the Canadian Reach, to examine the force pump. Moments after the engines were restarted, one of the boilers burst, “moving from their place in a forward direction every boiler, the greater part of the water being thrown to the upper deck, several of the deck passengers, and the greater part of the crew were scalded,” the Arkansas Gazette reported, with another newspaper stating that “the sufferers who were not instantly killed were in a most deplorable condition.”

Two crew members were killed instantly, and six other people died that day. Twelve other people died of their injuries and were buried over the following five days. Two other crew members were blown overboard, one of whose body was recovered and the other presumed dead; the Car of Commerce’s captain counted eight deck passengers and thirteen crewmen as fatal casualties. A Nashville, Tennessee, newspaper reported several additional later deaths that may have raised the toll to twenty-four dead from the explosion.

Shortly after the explosion, the steamboat LaGrange arrived and took away many of the uninjured passengers. The Paul Jones, another steamboat, came across the Car of Commerce and towed the vessel northward.

Captain J. Cocks (or Cox) blamed the cast-iron head of a recently installed boiler for the accident, stating that “the one that burst had an extremely thin head, compared with the other four,” noting that a similar boiler had recently burst aboard the steamboat Atlas, killing a man.

The Car of Commerce catastrophe may be one of the earliest examples of the dangers of steamboat travel in Arkansas waters in the 1800s, where boiler explosions would later cause mass casualties on the Rob Roy in 1836, the Persian in 1840, the J. Wilson in 1853, the Sultana in 1865, and the Miami in 1866. 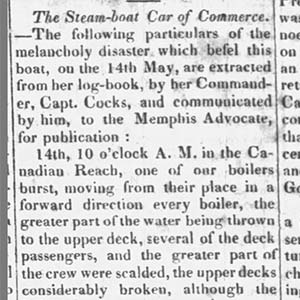