The Butler-Matthews Homestead is a complex of agricultural structures located near Tulip (Dallas County). Sixteen structures are located in the complex, dating from the 1850s to 1930s. The complex was added to the National Register of Historic Places on October 28, 1983.

Alexander Butler arrived in Dallas County from North Carolina in the early 1850s and constructed a home on the property. He first obtained forty acres of federal land north of Tulip in 1855, followed by 160 acres in 1857; the second parcel is the location of the homestead. Constructing a house around 1853, Butler built a thriving agricultural enterprise in the area before the Civil War. By 1850, he owned fifteen enslaved workers and also operated a mercantile business. Four of his sons served in the Third Arkansas Infantry during the Civil War. After the war, Butler continued his businesses and, by 1870, owned about $10,000 worth of real estate. (Alexander Butler was an ancestor to lawyer and philanthropist Richard Colburn Butler Sr., who played a major role in the 1957 desegregation of Little Rock Central High School as the attorney for the Little Rock School Board.)

The original home burned in 1921 and was replaced the next year by the current structure, constructed by Ben Matthews. The two-story structure rests on concrete piers, is covered with weatherboard, and is topped with a gable roof. Fronted by a full-length porch on both the first and second stories, the home is accessed by a centrally located single entryway on each level.

Fifteen additional structures supported the agricultural operations at the farm. They are listed here in clockwise order starting to the north of the house and continuing to the east and south. (No structures are located directly to the west of the home.) The first building to the north is a small gable-roofed house constructed in the late 1850s. The braced frame house is covered in weatherboard and rests on wooden blocks. The home contains two four-over-four windows on the front with a centrally located door. The east end of the building includes another window, while the west end has an exterior brick chimney. Nearby is a smokehouse constructed around 1910. The wooden frame building is covered in board-and-batten siding and sits on a brick foundation.

Constructed around 1895, a nearby potato house is topped with a gable roof and sits directly on the ground. Originally covered with weatherboard, the exterior had been covered with sheet metal by the time of the nomination to the National Register. A combined well and milk house constructed around 1900 includes an open west side with a concrete-lined square well and an enclosed east side. Constructed in the late 1850s, an office is located to the south of the main house. Made from notched logs, the building rests on brick piers and is topped with a gable roof. A chimney located on the south end of the building was in ruins when nominated to the National Register.

Various structures in the complex were constructed at unknown dates. These buildings include a nearby privy and a former hen house that was repurposed to house farming equipment. Other buildings include a cow barn that includes cribs on two sides and is topped with a gable roof, a blacksmith shop with a shed addition, and a small servant’s cabin. Another well is topped with a frame to allow the use of a pulley system to bring up buckets of water.

Additional buildings on the property include two garages, a corn crib, and another barn. The barn is constructed from round logs and includes cribs on two sides, as well as shed additions.

The complex is an important example of plantation agriculture in southern Arkansas, particularly because of the presence of two antebellum structures in the complex. The property continues to be held in private hands in the twenty-first century. 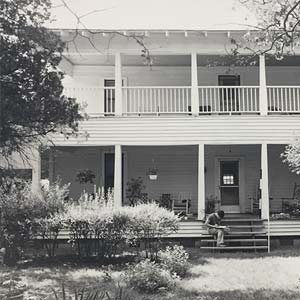