The Burdette School Complex Historic District is a group of six buildings located in Burdette (Mississippi County), with historic buildings constructed between 1922 and the late 1940s. Classes at the complex ceased at the end of the 2001–2002 academic year, and the complex was added to the National Register of Historic Places on October 28, 2001.

The earliest school in Burdette operated in a building owned by the Three States Lumber Company. Although the dates of operation are unknown, the building burned, and the company replaced it before a third building was constructed directly across from future location of the school complex. The residents of Burdette approved a twelve-mill school tax in 1917, leading to the creation of the Burdette Special School District No. 35. With the construction of a new school building in 1922, the old building served African American students. By 1929, the district included a total of seven schools, including the one in Burdette, one at Florenden Plantation, and the remainder in the countryside between Burdette and Blytheville (Mississippi County).

The oldest building in the complex was constructed in 1922. Built in the Prairie Style, the building faces north and is topped with a truncated-hipped roof. The building is fronted by four sets of double twelve over one windows with a single twelve-pane window located above the centrally located front door, which also contains fifteen panes of glass and is flanked on both sides by five pane sidelights.

Constructed in 1939 by the Works Progress Administration (WPA), the next oldest building in the district is an English Revival–style, single-story, red brick structure that faces north. The building includes a large rectangle wing on the north connected to a smaller rectangular wing to the south by an auditorium.

On the southeast corner of the complex is the old cafeteria, constructed around 1930. The Craftsman-style building faces north and is topped with a hipped roof with five louvered dormer vents. A nearby gymnasium constructed in the 1940s consists to three connected Quonset huts fronted by a false front parapet façade. Due to the façade, the three distinct huts are only discernable from the rear. The gymnasium is topped with a metal roof, and the interior of the building includes woodwork on the floor, ceilings, and walls. Built-in bleachers are also in the building.

The final contributing structure in the complex is an agricultural building designed in a Plain Traditional style. Entrance to the building is gained through an off-center single leaf door topped with a gable roofed porch. All the windows in the building have been covered with plywood, but the original windows remain. Both the agriculture building and the old cafeteria received renovations of asbestos siding in the 1940s.

Also included in the complex is a cafeteria constructed in 1967. It is not a contributing structure to the historic district.

In the early morning hours of September 20, 2015, part of the complex burned to the ground. The gymnasium and new cafeteria survived the fire. 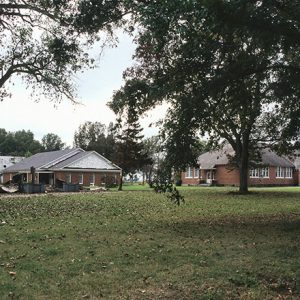