On May 16, 1900, an African American named James (Jim) or John Brodie—accounts differ—was killed near Raggio (Lee County) for allegedly attacking a local planter and merchant named John Blunt. The murder is considered a lynching by many institutions that keep track of lynchings across the nation.

According to the June 15 edition of the Forrest City Times, the lynching happened as a result of a disagreement between Blunt and Brodie in the middle of May. Brodie allegedly tried to shoot Blunt, and they exchanged several shots before another African American shot Brodie in the face. Brodie appeared before a magistrate and was placed in the custody of two Black constables. Blunt sent to Marianna (Lee County) for a deputy sheriff, and W. H. Ford (identified in other sources as M. H. Ford) responded. Brodie was turned over to Ford, who left Blunt and two men identified only as Ligon and Brewer to guard him.

The story is a bit confusing here, since other sources report that the Blunt who had custody of Brodie was instead W. F. Blount, who was later indicted for Brodie’s lynching. W. F. Blount had also been involved in a violent incident a year prior to these events: he was alleged to have killed a man named Marchman for persuading tenants to leave the Brickeys (Lee County) farm that Blount managed. He was acquitted of this crime in mid-May 1899.

While Brodie was in custody, Ford was awakened during the night and told that Brodie had escaped. On May 24, some raftsmen found his body floating in the St. Francis River, and it was taken to Marianna and buried. According to the Fort Smith Times, there were suspicions about the death, and Brodie’s body was exhumed. An examination found that Brodie had been shot in the head and weights attached to his body to sink it. Thirty witnesses testified in front of a coroner’s jury, which ruled that Brodie had been killed by W. F. Blount, Ed Ligon, and possibly others while he was in Ford’s custody. Blount and Ligon were arrested and released on bonds of $4,000 each. There is no information available about a subsequent trial or its outcome. 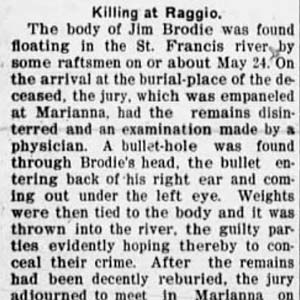