On December 2, 1893, an African-American man named Bob Greenwood was shot by so-called whitecappers who went to his home near Cherry Valley (Cross County) to whip his wife after an altercation. (The terms “whitecapping,” “night riding,” and “bald knobbing” denote extralegal acts of violence targeting select groups and carried out by vigilantes under cover of night or disguise such as masks.)

While most newspapers were unsure of what precipitated the lynching, the December 17 edition of the Arkansas Gazette reported that the children of a white man (William Wilson) and the children of an African-American man (Bob Greenwood) had an argument, and their mothers joined in the quarrel. When Wilson’s wife reported this to her husband, he became incensed. On December 2, Wilson and a group of whitecappers went to Greenwood’s home and attempted to whip his wife in retaliation. When Greenwood intervened to stop them, the men either shot or beat him and threw his body into a nearby stream. According to the Southern Standard of Arkadelphia (Clark County), the whitecappers were all drunk and ran off without their horses, which were found in the area the next morning either tied to trees or wandering.

During the altercation, William Wilson’s mask slipped, and he was identified by Greenwood’s wife. He was arrested and confessed to the crime, naming B. F. Clampit, Dr. T. F. Wright, and blacksmith M. L. Morris as his fellow whitecappers. Wilson was then taken to jail in Jonesboro (Craighead County) for safekeeping. Authorities launched a search for the other three men, and Morris was arrested on December 7. Although the sheriff and his deputies were searching for Wright and Clampit, they had gone into hiding. The Standard reported: “The negro stood high among his own people…and indignation among them is intense.” By December 22, according to the Standard, the governor had offered a reward of $100 each for the capture of the two and their delivery to the sheriff. It is not known if they were found, and there is no indication that anyone was actually tried for Greenwood’s murder. 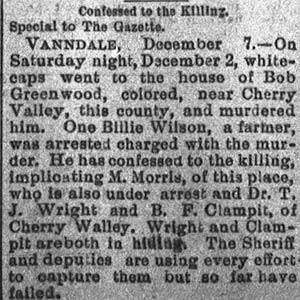