The American Legion Post 127 Building, located on the northeast corner of Cherry and Armstrong streets in Eudora (Chicot County), is a Rustic-style structure erected in 1934 with assistance from the Civil Works Administration (CWA), a Depression-era federal relief program. It was listed on the National Register of Historic Places on October 8, 1992.

Local veterans of World War I established an American Legion post at Eudora on April 9, 1920, and named it in honor of Wilson B. Burnett, an eighteen-year-old soldier from Montrose (Ashley County) who was killed in action in France on July 20, 1918. It would be another fourteen years before the post had a permanent home with the assistance of the CWA. In seeking CWA funding for construction of a Legion hut on land donated by the city, post commander Thomas Fulton Flowers wrote that “we plan on allowing the use of our hut when it is completed for a community house as well as for the use of the legion.”

The CWA estimated that it would cost $5,048.78 to complete the t-shaped log structure, which was CWA Project 9-38-12, but by the time it was finished under the supervision of Legion building committee members L. L. Lipe, T. W. Bagot, T. V. Baxter, J. M. McLeod, and Dudley Easterling, it came in slightly under budget at $4,893.45. It was designed in the Rustic style common among Legion huts in Arkansas and elsewhere around the country. While the National Register nomination states that the building was constructed by the Works Progress Administration (WPA), CWA records say that the “entire building erected by CWA funds.”

The new Legion hut was dedicated on April 8, 1934, with R. L. Gordon, the national vice commander of the American Legion, giving the principal speech, and Claud A. Brown, director of the Arkansas Service Bureau, detailing Wilson Burnett’s record as a soldier. The Eudora High School Girls Glee Club provided music for the event. The building soon housed a library, meeting the CWA requirement that “the various Legion huts built with CWA funds…should be used as a ‘community center.’”

The American Legion Post 127 Building apparently fell into disrepair over the years, and in 1986 the Eudora Garden Club restored the structure. It serves in the twenty-first century as a private residence. 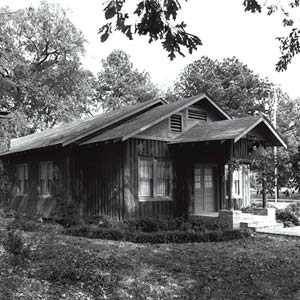 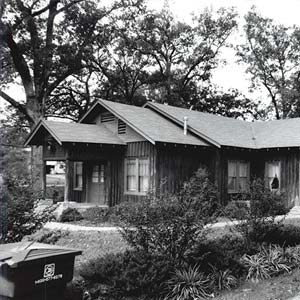