When Arkansas was first settled, the Grand Prairie seemed untamable to cotton farmers who preferred the rich soils of the Delta region or new land claimed by clearing away the forests. Following the Civil War, though, newcomers to the state made their home on the Grand Prairie, and rice farming succeeded where other kinds of agriculture had seemed unpromising. The Stuttgart and Arkansas River Railroad (later part of the Cotton Belt) was built to export Arkansas rice and bring supplies to the farmers and settlers. Where the rails crossed older farms, depots were established, and cities and towns were built. The railroad was completed across the farms of J. I. Porter and Martin Baker in 1891, where the Stuttgart Town Site and Development Company had already acquired land and platted a town the previous year. The town was named for Almyra Sayre, Porter’s sister, who lived on a farm south of the new community. George and Mary Place moved from Gillett (Arkansas County) into the first house completed in Almyra. There, they operated a boardinghouse for railroad workers. Other community builders quickly followed. C. M. Hillman opened a store and, on August 5, 1891, became the first postmaster of Almyra. C. F. Edwards opened a drugstore, and George Chambers also owned and operated a store. A schoolhouse was completed in November 1891. A non-denominational Sunday school was held in various houses and also in the schoolhouse throughout the course of the first decade of Almyra’s existence.

A Methodist church was built in Almyra in 1901, joined later by a Baptist church. Also in 1901, a hotel was opened, built and operated by T. L. C. Wheeler. The town was incorporated on July 5, 1904, with Dr. W. H. Boswell elected the first mayor. That year, W. E. Bruner and H. D. Sebree established a handle factory, and a rice elevator began operation in Almyra in 1908. Rice milling machinery was added to the mill, but the entire complex burned down after a few years of operation. Estimates of the town’s peak population range from 800 to 1,000, although official census records report significantly smaller numbers. A large brick school building was erected in 1915. By 1927, local businesses included hotels, restaurants, a butcher shop, a barber shop, a lumber yard, a theater, machine shops, hardware stores, feed stores, grocery stores, and drugstores. Buses ran several times a day connecting Almyra to Stuttgart, DeWitt, and Gillette.

When the Stuttgart Airfield was built during World War II, an additional airfield was created three miles west of Almyra on 640 acres. Its two runways were meant as relief for the larger military airfield. After the war ended, the small airfield was sold to the town of Almyra and has maintained continuous operation since that time, especially for crop-dusting planes. Almyra’s schools were consolidated into the DeWitt school system in the late 1940s; the school system continued to use the building in Almyra until 1972. Bus service to the county’s larger cities was eliminated in the 1950s, since it could not compete with the growing use of private automobiles. Also during the 1950s, Almyra received a telephone system, a community water system, a fire department, paved streets, a city park, and a community swimming pool.

A community center replaced the schoolhouse. The Almyra Farmers Cooperative Association continues to offer service to farming families. A well-tended cemetery is a source of pride to the community. The last train ran through Almyra in 1996. The official population of Almyra in 2010 was 283. 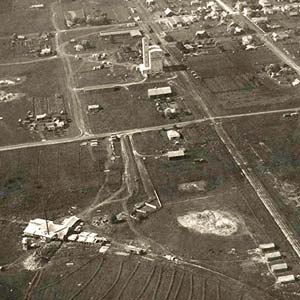