The Alexander House in Little Rock (Pulaski County), built for Julian and Natalie Alexander in 1962, was designed in the Mid-Century-Modern style by noted Arkansas architect Noland Blass Jr. It was listed on the National Register of Historic Places on March 24, 2020.

L. Julian Alexander was the owner of Majestic Laundry and Cleaners, a highly successful Little Rock laundry and dry-cleaning business. He and his wife, Natalie Loeb Alexander, were involved in civic affairs in Little Rock. Julian Alexander was a Pulaski County Grand Jury foreman and a member of the Board of Equalization. He also served as crusade chairman for the Pulaski County Unit of the American Cancer Society and was a member of its executive committee, the March of Dimes board, Temple B’nai Israel and its board, the Rotary Club of Little Rock, and the board of the Little Rock Jewish Federation. Natalie Alexander was also a member of Temple B’nai Israel and worked at Arkansas Children’s Hospital and the Arkansas Arts Center (now the Arkansas Museum of Fine Arts.)

The Alexander House is located at 24 East Palisades Drive, an east/west-oriented street on a ridge located about 275 feet above the Arkansas River on the northern edge of Little Rock’s Heights neighborhood. The Palisades neighborhood is characterized by large homes designed in a variety of mid-twentieth-century architectural styles located on large lots. The house is built on a continuous concrete-block foundation and has walls mainly sided in brick. The rear wall, however, which faces the river, is comprised mainly of glass in order to showcase the panoramic views of the river below. From the street, the house appears to be one story tall, but it is over two stories tall in the rear, due to the steep slope of the lot. The house is topped by a side-gable roof covered in asphalt shingles and pierced by a large central brick chimney with a hipped metal cap along with eight square skylights on its south-facing slope.

The interior of the Alexander House is arranged so that the main public spaces of the house are on the top floor, and the lower floor contains some of the bedrooms and the utilitarian spaces. The chandelier in the dining room came from the Busch Mansion in St. Louis, Missouri. The living room is separated from the entrance foyer by the large brick fireplace. Hallways go east and west off the foyer to the master bedroom and stairway to the west and the kitchen area and a bathroom to the east. The floor in the main part of the house is carpeted, while the foyer and hallways have a brick floor. Walls on the main floor are a mixture of sheetrock, wood, and brick. The ceilings throughout much of the main floor are vaulted and covered in sheetrock with dark wood strips separating the ceilings into rectangular panels.

Changes to the house have been limited to the interior and have been cosmetic in nature, with the largest modifications occurring in the house’s kitchen and bathroom. The exterior of the house still reflects Blass’s design from 1962 and retains its Mid-Century Modern characteristics. The house is designed to give privacy from the street, which is evidenced by the lack of fenestration on the front façade, and to allow interaction with the outdoors, which is still evident in the large expanses of glass across the rear façade.

After his wife’s death in 1968, Alexander lived in the house until approximately 1971, when the house transferred to Walter Trulock, according to the 1972 city directory. However, by 1973, the house was occupied by Griffin and Mildred Smith, the owners of the property as of 2020. 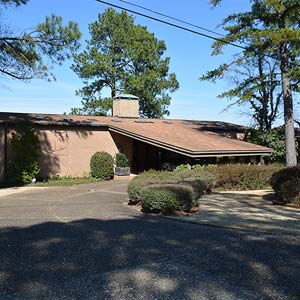