Although apparently only one Arkansas newspaper covered it, in late August 1884 an African-American man named Abe Livingston was hanged in Desha County for allegedly robbing and threatening a white man named William Kite. A search of public records revealed no information on either Kite or Livingston.

According to an August 26 article in the Harrisburg, Pennsylvania, Daily Independent, which was reprinted a week later in the Batesville Guard, Livingston was a “dangerous negro” who, sometime earlier in 1884, had robbed Kite. He was arrested at the time and put in jail in Arkansas City (Desha County). At some point in July, he escaped from jail. While he was free, he allegedly made several attempts to kill Kite and also sent letters to others saying he was going to kill them or burn down their houses.

Livingston was eventually recaptured at the mouth of the White River in Desha County on August 26. Officers were in the process of returning Livingston to the Arkansas City jail when a group of masked men intercepted them and demanded that they turn over Livingston to them. The officers were overpowered and acceded to the mob’s request. Livingston was then taken into the nearby woods and hanged from a tree, and his body was riddled with bullets. According to the Independent, Livingston “was undoubtedly one of the worst negroes that ever infested this section of the State, and while the citizens deplore mob law, they breathe easier since his death.” 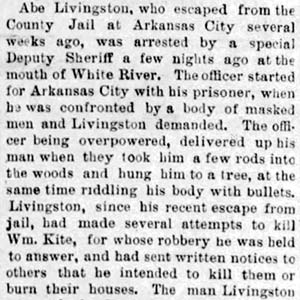