The William H. Grey Gravesite is the last remaining physical property associated with one of the state’s most prominent African-American Masonic, religious, and political leaders. The gravesite, which is located in Magnolia Cemetery in Helena-West Helena (Phillips County), was added to the National Register of Historic Places on September 27, 2019.

William Henry Grey was born free in Washington DC on December 22, 1829. By 1863, he had moved to Helena, Arkansas, and was engaged in the grocery and bakery business. Grey participated in a convention held in Little Rock (Pulaski County) by African Americans in 1865 to discuss the betterment of Black Arkansans. Having gained a reputation as an outstanding speaker at this convention, he was chosen as one of eight Black delegates to the Arkansas 1867 constitutional convention. He emerged from the convention as a leader and was elected to the Arkansas General Assembly. In 1872, as a delegate to the Republican National Convention, he seconded the nomination of Ulysses S. Grant, becoming the first African American to address a national presidential nominating convention. He served as the commissioner of Immigration and State Lands from 1872 to 1874. Grey was a leader of the Masons and served as the first Grand Master of the Most Worshipful Grand Lodge (Colored) of Free and Accepted Masons of Arkansas. He died in 1888, likely from a stroke.

His gravesite is marked by an impressive seven-tiered sandstone obelisk that was erected in his memory by the Masons of Arkansas. The monument is engraved with a number of decorations and symbols, all on the east side. The three remaining sides remain smooth with exception of the seventh tier.

At the peak of the top tier is a biblical star with the Masonic square and compass below.

On the second tier, engraved in all capital letters is:

While the third tier exhibits only a simple anchor, the fourth is engraved with a number of Masonic symbols. Starting on the left is a bell, followed by a pillar, topped by the sun. Next is an open book with the Masonic square and compass engraved on its pages topped by an eye with rays of light. Continuing right is a second pillar topped by a crescent moon and surrounding stars. The engraving is completed with a ladder on the far right. All of these are known to have Masonic significance.

The fifth tier consists of fourteen lines of biographical information all in capital letters:

MEMBER OF THE CONSTITUTIONAL CONVENTION OF ARK. 1868

REPRESENTATIVE OF THE ARKANSAS LEGISLATURE 1868

CIRCUIT CLERK AND RECORDER OF DEEDS OF

PHILLIPS CO. IN THE ARKANSAS LEGISLATURE 1872

DELEGATE TO THE NATIONAL CONVENTION 1872

APPOINTED COMMISSIONER TO REPRESENT THE STATE

OF ARK. IN THE VIENNA EXPOSITION IN AUSTRIA 1873

The sixth tier of the monument contains a poetic verse.

Up all the [illegible] graded steps.

From Life obscure to Fame

To leave thy race a name—

A name in legislature hall.

The highest in the mystic craft.

Following the poem is information on the origin of the monument all in capital letters.

ERECTED TO THE MEMORY OF

BY THE MASONS OF THE STATE OF ARKANSAS

The seventh and final tier is bare of any engravings and is left rough on all sides.

In the twenty-first century, the monument is in a fairly good state of preservation, although the top tier has a slight twist. There are small chips on various parts of the surface of the obelisk and the base shows minor deterioration. 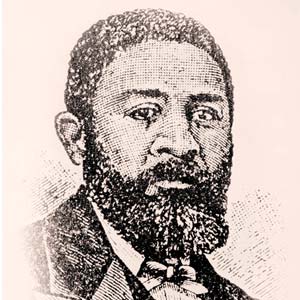