The incorporated town of West Point is located in central White County, about five miles southeast of Searcy (White County). West Point thrived in its early days as a bustling river port and overcame the ravages of the Civil War, but the arrival of local railroads in the 1870s overshadowed the supremacy of trade via steamboats and diminished its importance as the commercial hub of White County.

The earliest evidence of human habitation around West Point is a burial mound constructed sometime after AD 1300. From the mid-seventeenth century onward, the West Point area was part of a hunting ground under the dominion of the Osage until the arrival of white settlers to White County, beginning in 1789. The foundation for a town was laid in 1850 when businessman J. M. West divided and sold lots along a high western bank of the Little Red River, naming it “West Point,” and it was quickly successful. West Point had an advantageous location on the Little Red; it was the farthest point upriver that was accessible to steamboats year-round.

Mobility in pre–Civil War days was dependent upon rivers—there were no local railroads yet, and perennial floods made overland travel tedious and problematic. Most White County commerce was facilitated through West Point, as cotton and other local goods made their way to markets in St. Louis, Missouri; Memphis, Tennessee; and New Orleans, Louisiana. Trade accessibility and an abundance of nearby bottomlands perfect for growing cotton translated into growth for the young town, which had 350 residents by 1860, not counting slaves.

Prosperity came to a sudden halt with the eruption of the Civil War, particularly following Union victory at the Battle of Pea Ridge in March 1862. During his bid to capture Little Rock (Pulaski County), Major General Samuel Curtis led a Union force that beset White County but turned back following defeat at the Action of Whitney’s Lane, about four miles west of West Point. The Union Army sent out an expedition of the area in search of supplies for the men and animals and a route to capture Little Rock but failed to find either. On the afternoon of August 14, 1863, a fierce engagement between a Union flotilla and Confederate cavalry took place on the Little Red River at West Point; the Union force prevailed, with casualties for both sides totaling three killed and at least twelve wounded. As the war dragged on, West Pointers only managed a state of bare existence, as both armies continually foraged and confiscated supplies from the populace, and White County became a hornet’s nest of bushwhacker activity. When the war ended, farms became productive again, and most newly emancipated black citizens who stayed in West Point went to work as sharecroppers.

West Point recovered somewhat but never again attained the level of prosperity enjoyed before the war. The town population was 123 in 1880, and an unofficial census listed 150 residents (not including African Americans) in 1888. At this time, West Point had three general stores, a drugstore, a blacksmith, a grist mill, a cotton gin, a wood shop, a school, and a railroad depot, as well as a church, but correspondent R. R. Wilson of the Memphis Avalanche mentioned in an 1887 article many other vacant store buildings and empty houses during his visit, speaking to the town’s bygone era of prosperity. Wilson did, however, praise the character of the townspeople, stating that they possessed “those open, generous and hospitable manners that welcome a stranger and remind him of ‘better days.’” However, these “better days” were not enjoyed by all. In 1900, a black schoolteacher named S. A. Jenkins was lynched in West Point.

From 1879 onward, West Point was connected via railroad to the St. Louis, Iron Mountain and Southern line at Kensett (White County), and West Point enjoyed regular rail access until 1900. In 1908, the Missouri and North Arkansas Railroad (M&NA) extended its line through West Point all the way to Helena (Phillips County), but the M&NA endured one setback after another during its existence, and most commercial traffic continued to pass by West Point rather than through it. The era of steamboat travel was also passing away; a steamboat left the West Point landing for the last time in 1923. The West Point stretch of the M&NA line fared little better, as M&NA rail service was notoriously irregular and the bridge spanning the White River at neighboring Georgetown (White County) was damaged by the Flood of 1927. Subsequent repairs to the bridge were ineffective and eventually futile since the M&NA ceased operations in 1946. 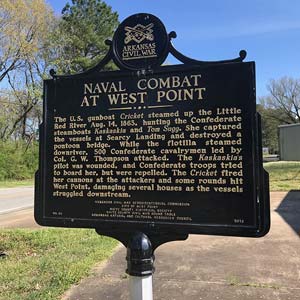