The Newton County Historical Society was founded in December 1953 by a group that included Walter Lackey, Mandy Hickman, and Albert Raney. In 1954, the society’s first official project was to build a monument near Marble Falls (Newton County) to memorialize a quarried stone from that area that had been used in the construction of the Washington Monument in Washington DC.

Sometime after 1961, the society dissolved, but it was later revived and reorganized in 1977 by Columbus Vaughan, Jack McCutcheon, Rhonda Teter, Leland Smith, and others. It was incorporated in 1981 as a 501(c)(3) nonprofit organization, with its purpose being to collect, preserve, promote interest in, and disseminate historical and genealogical material relating to Newton County and the surrounding area.

In the late 1980s, the society established the Newton County Historical Museum using the old laundromat building across from the city hall in Jasper (Newton County). In 1991, a generous contribution by William Stiritz allowed the society to purchase the two-story Victorian home of his grandfather, Dr. William A. Bradley, to house the museum. The Bradley House Museum is located at 403 W. Clark in Jasper, four blocks west of Scenic Highway 7. The museum provides an ever-expanding library for regional family research. Admission to the museum is by donation.

In 1994, the society acquired the Chaney Log House, which was located in Osage (Carroll County) and served as a post office and possibly a Butterfield Overland Mail Company stage stop. This house, which may have been passed by travelers on the Trail of Tears and survived the Civil War, now sits on the grounds of the Bradley House Museum. Although its restoration has not been completed due to lack of funding, it is still one of the most photographed houses in Jasper, and local school teachers use it as a teaching tool for some of their classes.

Due to migration of some of the former residents of Newton County, the society’s membership is spread over the entire United States. Membership dues are $15 for a calendar year or $150 for a lifetime membership. 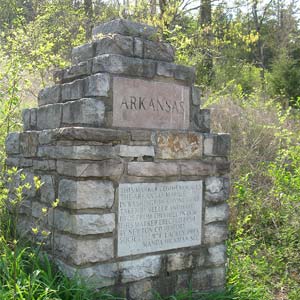