A veteran of state government, Mickey Dale (Mike) Beebe was inaugurated as Arkansas’s forty-fifth governor on January 9, 2007. He remained popular with Arkansas’s electorate across his entire eight-year term of service, with support that crossed party lines during a time of polarization in American politics. The steadiness of the Arkansas economy and state finances during the Great Recession, the near total elimination of the state’s sales tax on groceries, and the culmination of the Lake View School District No. 25 v. Huckabee public school lawsuit were the hallmarks of the Beebe governorship, which was often characterized as “pragmatic.” However, Beebe also served as the leader of the state Democratic Party during its historic fall from power.

Mike Beebe was born in Amagon (Jackson County) on December 28, 1946. During his youth, Beebe lived in several states before returning to Arkansas. In 1964, he graduated from Newport High School. Beebe, who never knew his biological father, was raised by his mother, who was a waitress; Louise Beebe’s life became a centerpiece in his populist campaign for governor in 2006.

After graduation from high school, Beebe earned a bachelor’s degree in political science from Arkansas State University (ASU) in 1968. He then went on to earn a law degree at the University of Arkansas School of Law in Fayetteville (Washington County) in 1972. Upon admission to the bar, Beebe began practicing law with the Lightle, Tedder, and Hannah law firm (later Lightle, Beebe, Raney, Bell, and Simpson) in Searcy (White County). In 1982, Beebe was named the state’s outstanding trial lawyer.

That same year, Beebe began his political career with a race for the Arkansas Senate. After the incumbent senator unexpectedly dropped out of the race from the newly redrawn district in which Beebe was running, Beebe was left without a primary or general election opponent. He, in fact, never faced an opponent in a twenty-year Senate career. He became known as one of the most effective state legislators based on his pragmatic deal-making ability. During his last session in the Senate, Beebe was elected president pro tempore of the body.

In the summer of 2005, Beebe announced that he would be a candidate for the Democratic nomination for governor in 2006. Although Beebe faced no opposition in the Democratic primary, he did finally face opposition in the general election from Republican Asa Hutchinson (a former congressman and Department of Homeland Security deputy secretary, as well as Beebe’s eventual successor as governor), Green Party candidate Jim Lendall (a former Democratic state representative), and independent candidate Rod Bryan.

Beebe raised and spent more money than any candidate for any political race in the state before him (over $6.5 million). His campaign emphasized a mixture of progressivism on economic issues—including strong support for reducing the state’s sales tax on groceries, raising the state’s minimum wage, granting universal access to pre-kindergarten educational opportunities, and maintaining the state educational standards—and traditionalism on cultural issues, including strong support for private property rights and gun ownership rights.

On November 7, 2006, Beebe was elected governor with an overwhelming majority of the vote—he received 55.6 percent of the vote, holding Hutchinson to only 40.7 percent; each of the two other candidates received approximately two percent of the vote. Beebe’s victory also had great geographical reach; he lost only fifteen of the state’s seventy-five counties.

In 2010, following a first term in which his approval ratings never fell below the mid-sixty-percent level, Beebe was reelected with 64.18 percent of the vote against Republican Jim Keet, who took only 33.82 percent. In that election, Beebe won every county in the state, including heavily Republican counties in northwestern Arkansas and in the Little Rock (Pulaski County) suburbs.

Beebe regularly attributed his strong public support to his administration’s “under-promising and over-delivering.” His first legislative session included legislation that cut the state’s sales tax on groceries in half—a tax that Beebe termed regressive. That legislative session also saw a ratcheting up in school funding, including the appropriation of $456 million to meet school facilities needs across the state. In response, the Arkansas Supreme Court ended the landmark Lake View school funding suit, deeming the state’s public schools “adequate” and “equitable.”

Future sessions saw Beebe’s continued commitment to eliminating the grocery tax as well as increasing taxes on tobacco (to pay for healthcare advances) and the severance tax on natural gas (to pay for road improvements).

During his time as governor, he also worked to shift state resources toward treatment for nonviolent criminal offenders and, importantly, developed the “private option” as a bi-partisan strategy for expanding Medicaid access for the working poor. Until his last legislative session, when his party was in the minority, Beebe generally successfully avoided public engagement with polarizing social issues such as abortion and LGBT (lesbian, gay, bisexual, and transgender) rights. The Beebe administration also was devoid of major scandal. All these elements were key to Beebe’s popularity; his job performance was typically approved by at least half of the state’s Republican voters, according to public opinion surveys.

Despite Beebe’s successes on both the political and policy fronts, his era as governor saw the Arkansas Democratic Party fall from power. Throughout Beebe’s first term in office, Democrats controlled overwhelming majorities in the state legislature and all statewide elected offices as well as holding both U.S. Senate seats and three of four seats in the U.S. House of Representatives delegation. However, as a result of a series of defeats in three election cycles beginning in 2010, the tables were entirely reversed by the time Beebe left office, with no Democrats holding statewide office or representing the state in Washington DC. The Republican Party held overwhelming majorities in the Arkansas General Assembly; Beebe was the first Arkansas Democratic governor to face a Republican-controlled legislature. Most analysts of the state’s politics cited President Barack Obama’s distinct unpopularity with the state’s white voters as the force for this change, and Beebe was the symbolic state party leader during this challenging period for Democrats in the state and nation.

Beebe and his second wife, Ginger Beebe, have three adult children. During her time as First Lady, Ginger Beebe focused attention on the mental health issues facing young people in Arkansas as well as returning the Governor’s Mansion to service as “the People’s House.”

In March 2015, Beebe joined the Roberts Law Firm PA of Little Rock. In December 2015, he was named to the board of directors for Tyson Foods.

Education Reform
Modern Era, 1968 through the Present
Politics and Government 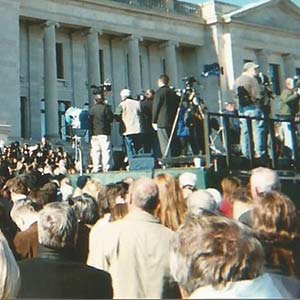