The James A. Dibrell House at 1400 Spring Street at Daisy Bates Drive in Little Rock (Pulaski County) was constructed in 1892. It is part of the twenty-four-block Governor’s Mansion Historic District, a residential neighborhood built in the late nineteenth and early twentieth centuries located in the Quapaw Quarter (an area loosely encompassing the boundaries of historic Little Rock). The district was listed on the National Register of Historic Places on September 13, 1978.

The home was constructed by real estate agent H. A. Bowman as a speculation for Dr. James A. Dibrell, who became an early president and dean of the Medical Department of the University of Arkansas (now the University of Arkansas for Medical Sciences). Upon graduating from the University of Pennsylvania, young Dibrell moved to Little Rock and immediately began his practice. Like his father, a prominent Crawford County physician, Dibrell soon became involved in the political scene of the medical community. During his career, he served as president of the city, county, and state medical societies and was a vice president of the American Medical Association. He married Lallie Reardon in 1878, and they had two sons.

The construction cost in 1892 was believed to be approximately $1,000. The Dibrells were able to add their own touches, such as parquet floors and walnut woodwork. They added other touches such as inlaid “wood carpet” floors, which were made from maple, walnut, and cherry. Four fireplaces were upstairs and four were downstairs. Dibrell was interested in innovations, and the house became known as the “gadget” house for its modern devices, such as an electric doorbell, burglar alarms, and a system of speaking tubes that functioned as an intercom system. A heating system also warmed every room in the house, an unusual convenience for that time. Dibrell was so caught up in the booming machine age that not one original feature was handmade. The 1940 addition to the home, which features stained glass, contains six early-twentieth-century “nickelodeon” machines that play music; two of the machines play instruments: one uses a banjo, and another, a violin.

By the 1960s, the house had been divided into apartments and had undergone several major structural changes. An extensive restoration began under the ownership of Carl Miller, who purchased it in 1968, and the Dibrell House became one of the finest, most detailed examples of private restoration in the state. Through analysis of old photographs, outstanding features were reproduced, such as hand-stenciled ceilings and sections of ornate trim, woodwork, and parquet floors. The house’s seven porches, in six distinct styles that reflect the architectural blend of Victorian styles, were also returned to their original appearance. In 1971, a fifteen-foot steeple was recreated and placed atop the forty-five-foot tower on the northeast corner of the house.

The downstairs color schemes are an exact restoration from Dibrell’s time of ownership, while the upstairs is period correct. Becky Witsell rendered the authentic stenciling of the ceiling designs in the home’s downstairs rooms, while Miller’s mother designed the Four Seasons themes on the bottom level. In the upstairs parlor, three pieces of Dibrell’s legacy were put on view: his portrait of the Gilt Edge Hunting Club, his military-style sterling-silver cutlery and canteen set, and his portable medical instrument kit. The home also contains a commemoration of the Medical Department’s first female graduate, Dr. Annie Schoppach.

The post-1968 renovations remained true to Dibrell’s reputation as a “tinkerer.” For example, while modern heat and air systems were installed, the return air for the air conditioning still follows the home’s original pattern, being routed through the upstairs transoms. The home remains one of the most prominent structures in the Governor’s Mansion Historic District in the twenty-first century. 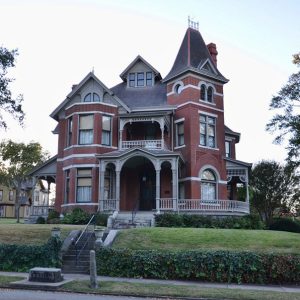