In late September 1903, an African-American man named Hellom was hanged by a black mob in Mississippi County for allegedly assaulting two young girls.

Census records for the year 1900 reveal that there were three black men in Mississippi County who might have been the victim of the mob. All lived in nearby households in Fletcher Township, and all had a similar surname. The first was Oscar Hullum, age twenty-five, who was working as a farm hand and boarding with Brady and Mary Randolph. The second was Will Hellum, age twenty-three, a farm worker who was living nearby with his wife, Lucy, and their son, Jonathan. Living with them was a brother-in law, Arthur Hullum, age twenty-two, and three other relatives. All three possible victims were born in Tennessee.

According to the Southern Standard, a man named Hellom was in jail accused of assaulting two African-American girls, ages five and ten. A mob composed entirely of African Americans overpowered the county sheriff and removed the prisoner from custody. According to the Standard, the lynching was “conducted in an orderly manner.” Hellom was asked if he had anything to say, and uttered, in “trembling tones,” only “a few inarticulate words concerning the crime.” After this, the mob hanged him. He died a few minutes later. 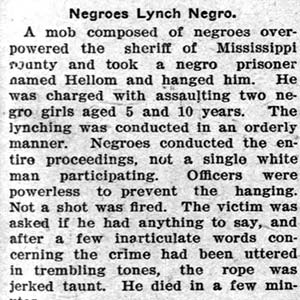