The Haggard Ford Swinging Bridge, located on Cottonwood Road eight miles north of Harrison (Boone County), is a single-span wire cable suspension bridge anchored by concrete towers and floored with wooden planks. Spanning Bear Creek, it was constructed in 1941 with assistance from the Works Projects Administration (WPA), a Depression-era federal relief program. It was listed on the National Register of Historic Places on June 30, 1995.

With its rugged, hilly landscape, Boone County still presented difficulties in the 1930s for travelers and farmers seeking to bring their products to market from remote areas. The county took advantage of the Depression-era Works Progress Administration (later Works Projects Administration) after its creation in 1935 to cut or improve roads and make travel easier.

Two of those roads would include suspension bridges. The first was erected in 1940 “over Crooked Creek between Bergman and Harmon on the WPA road connecting the two towns,” according to the Harrison Daily Times. The other, on WPA-built Cottonwood Road, would cross Bear Creek at Haggard’s Ford, named for widow Nancy Haggard, who settled at the site in 1889. The Harrison Daily Times reported on March 13, 1941, that “one of the longest and most useful WPA farm-to-market roads in Boone county…will be completed within two weeks.…This is known as the Cottonwood road and it has been under construction for several months, only the Bear Creek bridge now remaining to be finished.” WPA project engineer J. Medlan of Fort Smith (Sebastian County) designed the 160-foot span.

The Bear Creek Bridge and the span at Harmon served Boone County travelers for twenty years until both were damaged by flooding on May 7, 1961. The Harmon Bridge was demolished, and the Haggard Ford structure was deemed unsafe for vehicular traffic.

By 1977, the Haggard Ford Swinging Bridge had become severely deteriorated, and county judge Clifford Thomlinson ordered it dismantled. This led to a public uproar and the formation of a Bridge Restoration Committee, which held a “plank sale” on July 30, 1977, to raise funds to restore the structure. With more than $3,280 raised by the committee and using volunteer labor, the bridge was restored and dedicated on September 3, 1977; it was opened to pedestrian traffic on October 1 of that year. A stone monument at the bridge’s entrance reads: “HAGGARD FORD SWINGING BRIDGE / 1939–1941 / CONSTRUCTED AS A W.P.A. PROJECT / SEPT. 1977 / RESTORED FOR HISTORICAL VALUES BY / LOCAL CITIZENS WHOS [sic] FINANCIAL AND / PHYSICAL INVOLVEMENT IN THE RESTORATION / PROJECT IS GRATEFULLY ACKNOWLEDGED / AND APPRECIATED.”

A total of twenty suspension bridges were constructed in Arkansas between 1894 and 1949, including six built by the WPA. Only three of them remain in the twenty-first century: the Beaver Bridge in Carroll County, the Sylamore Creek Bridge in Stone County, and the Haggard Ford Swinging Bridge in Boone County, which is also the only surviving WPA-built suspension bridge. The Haggard Ford bridge continues to serve pedestrian traffic. 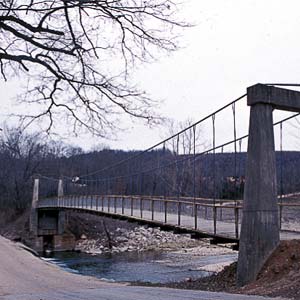 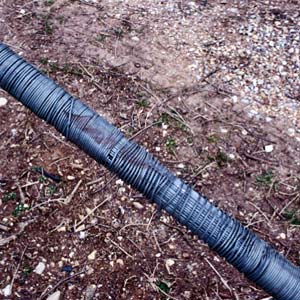