Crystal Bridges Museum of American Art, located in Bentonville (Benton County), officially opened to the public on November 11, 2011. The 201,000-square-foot museum with its 120 acres of forest and garden was designed to portray the spirit of America. The museum was founded by Alice Walton, daughter of Sam Walton, the founder of Walmart Inc. The museum took its name from Crystal Spring, which is located nearby on the grounds, and the bridge-shaped design of the building, designed by Moshe Safdie. The museum collection includes art from colonial times to the present day. It also offers temporary exhibits from other museums and collections.

Alice Walton was ranked as one of the richest people in the United States in 2010 and had owned some of the paintings now in the museum. Her main goals for the museum were to bring art appreciation to Arkansas and nearby states and to draw visitors from father away. The Walton Family Foundation has donated more than a billion dollars to the museum.

Walton announced her intentions to build a museum in May 2005 and said she was buying a multimillion-dollar artwork, Kindred Spirits, to place there. In September 2008, Crystal Bridges unveiled Group of Bears, the first of many outdoor sculptures. A temporary observation deck was opened July 2009. That year, August Don Bacigalupi, a specialist in post-1945 American art and visual culture, was hired as director of the museum. In March 2010, it was announced that the costs for the museum building would surpass the original estimates. In June 2010, it was announced that creators of a boutique hotel—21c Museum Hotel Bentonville—were pairing with Crystal Bridges to open a hotel in downtown Bentonville a few blocks south of the museum; the hotel opened in February 2013.

Regular entrance to the museum is free due to a grant from Walmart Inc., but select temporary exhibits may have admission fees. Crystal Bridges is partnering with the Louvre in Paris and two other museums to share their art. The collaboration will extend for four years and involve annual exchanges of art and other programming by theme. The purpose is to educate patrons on cross influences of European and American art.

The process of acquiring items for Crystal Bridges occasionally proved controversial. For example, Crystal Bridges sought access the 101-piece Alfred Stieglitz Collection, which is owned by Fisk University, a historically black college in Nashville, Tennessee. Although the collection was given to the university by famous American artist Georgia O’Keeffe in 1949 with a “no-sale” condition, the university needed money, and the art collection would have to be sold anyway if the university closed. After a lengthy legal process ultimately involving the Tennessee Supreme Court, in August 2012, a plan was decided upon by which Crystal Bridges would pay Fisk $30 million so that, starting in the fall of 2013, Crystal Bridges and Fisk could both display the collection on a two-year rotation. The collection, which was amassed by O’Keeffe’s husband Alfred Stieglitz, contains four works by O’Keeffe along with others by such famous artists as Picasso, Cézanne, and Renoir.

In addition, some commentators criticized Walton for establishing such a lavish museum when the Walmart Inc. company, the source of her wealth, is known for poor labor practices, including underpaying employees. Too, many national writers complained about the location of the museum, expressing the opinion that Bentonville was unfit—as it is a small city (35,301 people as of 2010)—and that such masterpieces of art would have been more accessible in a larger city.

The museum has extensive collections of paintings from many time periods; its holdings include more than 400 works on display and more than 800 in storage. Some of the more famous art from the colonial era is George Washington by Charles Willson Peale, Mrs. Theodore Atkinson Jr. by John Singleton Copley, Richa Franks (attributed to Gerardus Duyckinck I), and Ottoe Half Chief, Husband of Eagle of Delight by Charles Bird King.

From the nineteenth century are such masterworks such as Valley of the Catawissa in Autumn by Thomas Moran, Portrait of a Girl and Her Dog in a Grape Arbor (anonymous), The Indian and the Lily by George de Forest Brush, Cattleya Orchid, Two Hummingbirds and a Beetle by Martin Johnson Heade, Kindred Spirits by Asher Brown Durand, and The Life of a Hunter: A Tight Fix by Arthur Fitzwilliam Tait.

Among the modern pieces of art are Composition (Still Life) by Arshile Gorky, Rosie the Riveter by Norman Rockwell, Thomas Hart Benton by Harry Sternberg, and Amoskeag Mills > by Charles Sheeler. The Steel Mill, Ploughing It Under, Tobacco Sorters, and Study for Slow Train through Arkansas are modern-era works by Thomas Hart Benton, a painter who lived in Missouri but painted largely in Arkansas by the Buffalo River. Two paintings by Arkansas artist Carroll Cloar are also included in the collection.

In September 2012, the Tyson Scholars for American Art program at Crystal Bridges was announced. The Tyson family and Tyson Foods together contributed $5 million to create the program, which will promote regional initiatives in the study of American art.

On November 11, 2015—the museum’s four-year anniversary—a permanent exhibit of a house designed by Frank Lloyd Wright opened on the grounds of the museum. The concrete, mahogany, and glass structure, which was built in 1954 in New Jersey, was disassembled and transported to Arkansas, where it was reconstructed. The museum offers guided tours of the furnished house. In April 2017, the museum unveiled a new entrance, elevator tower, and pedestrian bridge. In April 2021, the museum announced an expansion that would increase gallery space by sixty-five percent and include additional studio and education facilities. 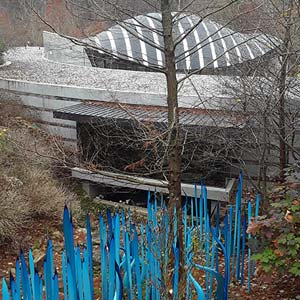