The small community of Beirne is located twenty-one miles southwest of the Clark County seat of Arkadelphia. It was founded by Illinois native and steamboat captain James Lewis Beirne in 1880. Originally named York, the community was later renamed for Beirne. The community, like many surrounding it, grew out of the timber industry, and it was once considered one of the premier shipping locations along the St. Louis, Iron Mountain and Southern Railroad. Like many of its neighboring communities, it too fell victim to waning timber production in the early 1900s. Today, Beirne is home to one of the largest producers of hardwood material in the world.

Quickly after the community’s establishment, Captain Beirne built a sawmill and Methodist church, which he pastored. By the end of 1880, a railroad depot was constructed, and Beirne’s sawmills and grist mills were in full operation. On May 7, 1880, Beirne established a post office under the name of York; on May 26, 1880, it was renamed Beirne. In 1881, Beirne’s daughter and son-in-law moved to the area, and the group established a store and planing mill on the 800 acres owned by Beirne. The community quickly gained the reputation as the best shipping point on the railroad for the citizens in the Okolona (Clark County) area. James Beirne died in 1908 and is buried in the town bearing his name.

In 1881, a correspondent to the Clark County newspaper Southern Standard wrote that the village had daily mail service and two functioning saw mills. The correspondent, identified only as Zebedee G. Beelzebub, also wrote of plans to construct a transportation line between Beirne and Okolona. In a subsequent 1897 issue of the Southern Standard, an article describes the village as growing due to “being settled up with a good class of emigrants from Indiana.” It also says the village had several business enterprises. There were two mills, one recently constructed by the Yeager Brothers, and another mill owned by F. M. White and managed by A. W. Cagle. White also owned a drugstore in the village. The article also mentions a school with around forty students, a general store, a post office, two churches, and a hotel. The mills located in the community produced lumber primarily for manufacturing furniture. In 1900, there were plans to establish a furniture factory in the community; however, these plans were never fulfilled.

The children in Beirne originally attended school at the Riley Mill School. Later, in 1892, school was held at the Oak Grove School. In 1915, a brick building was constructed to house the community’s school. The Beirne School was consolidated into the Gurdon (Clark County) school district in the 1930s.

The Yeager and Hartley Mill, established in 1882, was destroyed by a fire in 1899 and remained untouched until 1904. Following its rebuilding, it was sold to the Pennsylvania Lumber Company. The Acme Handle Company also operated a mill in Beirne for about twelve years before its closing. The Beirne Lumber Company was founded under the interest of James G. Clark, and a large mill began operations in the community in 1932. The establishment of this new mill brought new jobs to the area during the Great Depression era, spurring many new families to move to the area. The mill was subsequently purchased by the Gurdon Lumber Company in 1939; in addition to the mill, the company purchased the old school building and converted it into an office for the mill operations.

In 1934, according to the Southern Standard, there were plans to establish a colony for the Federal Emergency Relief Administration (FERA) at Beirne on 20,000 acres of timberland owned by James Clark. However, these plans never came to fruition.

In September 1974, the International Paper Company bought out the Gurdon Lumber Company and all its interests, including the mill at Beirne. In 1981, the mill and associated buildings were sold to Anthony Timberlands Company. The mill continues to operate as of 2012.

While considerably smaller than at previous times, present-day Beirne is still heavily linked to the timber industry. The Anthony Timber Inc. hardwood mill serves as one of the major sources for revenue and employment for the area. The mill is considered to be one of the largest producers of quality hardwoods in the world. The community also relies heavily on the city of Gurdon. The children in Beirne attend Gurdon schools, and many residents travel the short distance for employment in Gurdon. State Highway 51 runs north-south through the community and links Gurdon and Beirne. Additionally, the Union Pacific Railroad runs near the community with a spur that services the Anthony hardwood mill. Nearby McNeely Creek Bridge is listed on the National Register of Historic Places. 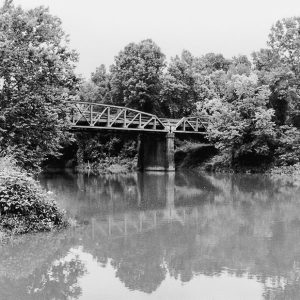