Two Arkansas State Veterans Cemeteries have been established in the state to accept the interments of military veterans and selected family members.

In 1997, the Arkansas General Assembly passed Act 235 to authorize the Arkansas Department of Veterans Affairs to establish and operate a state veterans’ cemetery system. National cemeteries are located in Little Rock (Pulaski County), Fayetteville (Washington County), and Fort Smith (Sebastian County). In 2001, the Little Rock National Cemetery closed to new interments with the exception of veterans or eligible family members in an existing gravesite. In an effort to offer additional burial locations for veterans and their families, the state veterans’ cemetery system was created. The system uses eligibility guidelines to determine which veterans and family members may be buried in the cemeteries. Funds for the construction of the cemeteries were provided by the U.S. Department of Veterans Affairs, and the Arkansas Department of Veterans Affairs manages and maintains the sites.

The first such cemetery was established in North Little Rock (Pulaski County). The Arkansas State Veterans Cemetery at North Little Rock was dedicated on November 11, 2001. The site comprises eighty-two acres that are available for interments. By November 2017, approximately 8,100 interments had been made in the cemetery. Veterans buried in the cemetery served in World War II, the Korean War, the Vietnam War, and Operation Desert Storm, as well as in Afghanistan and Iraq. In 2018, the cemetery was expanded by sixteen acres. In 2020, the cemetery was expanded by 141 acres after land from Camp Robinson was transferred to the Arkansas Department of Veterans Affairs.

The second location in the system was established in Birdeye (Cross County) in 2012. A plot of 100 acres was purchased by the state in 2008, and construction on the site began in 2010. The Arkansas State Veterans Cemetery at Birdeye accepted its first interment in 2012. By August 2017, approximately 300 interments had been made in the cemetery. The following year, the U.S. Department of Veterans Affairs recognized it as one of the top four state-run veterans cemeteries in the country.

The cemetery system is supported by the Arkansas State Veterans Cemetery Beautification Foundation, which works to enhance the landscape of the sites.

For additional information:
Field, Hunter. “Cemetery at Birdeye Gets a Military Salute.” Arkansas Democrat-Gazette, August 11, 2018, pp. 1B, 8B. 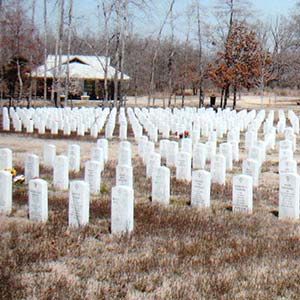