The Lincoln Avenue Viaduct is a single-span Rainbow Arch bridge constructed of reinforced concrete in 1928. It was listed on the National Register of Historic Places on April 9, 1990. On April 21, 1927, the old Baring Cross Bridge between Little Rock (Pulaski County) and North Little Rock (Pulaski County), built in 1873 to carry rail traffic across the Arkansas River, was largely washed away by raging floodwaters despite the Missouri Pacific Railroad Company having weighed it down with coal cars. As the company worked to rebuild the crucial link to its sprawling railyards in North Little Rock, it offered to build a new viaduct linking Lincoln Avenue and North Street above the railroad tracks on the Little Rock side …

In the acclaim for Charles Augustus Lindbergh following his solo trans-Atlantic flight in 1927, few people recognized the small but significant role Arkansas played in the historic event. Today, a modest monument off Highway 159 near Lake Village (Chicot County) marks the Arkansas site that contributed to one of the greatest stories in American history. In April 1923, Charles Lindbergh was a young airmail pilot who had taught himself to fly. He had engine trouble on a flight between Mississippi and Houston, Texas, and landed near Lake Chicot in Lake Village, in an open space which was used as a local golf course. The nearest building was the clubhouse. The keeper, Mr. Henry, and his family sometimes used the building … 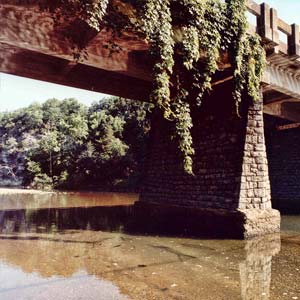 The Little Missouri River Bridge, also known as the Nachitoch Bluff Bridge, is a through-truss bridge located north of the Interstate 30 crossing of the Little Missouri River, connecting Clark and Nevada counties. Beirne (Clark County) and Gurdon (Clark County) are the two closest communities to the bridge. The bridge was added to the National Register of Historic Places on April 9, 1990, and is depicted on a mural in Prescott (Nevada County) at the intersection of Main and First streets. It closed to traffic in the mid-1990s. Details about the construction of the bridge are scarce. Documentation suggests that it was constructed in 1908 by the Morava Construction Company. The main span of the bridge measures 185 feet and was …

The Little Rock Air Force Base (LRAFB) is located on 6,412 acres of land within the city limits of Jacksonville (Pulaski County). The base is a self-contained community that has contributed greatly to the economy and growth of the area since it became operational in 1955. The LRAFB is the largest C-130 base in the world. In 1951, members of the Greater Little Rock Chamber of Commerce learned that the Air Force was considering locating a new base in the central United States but that Congress was not interested in purchasing land for the base because the United States already owned some World War II airfields that could be converted to active bases. Everett Tucker, manager of the Industrial Department …

During World War I, an air supply depot was constructed at Little Rock (Pulaski County) south of 12th Street near the Little Rock airport. Construction began in 1918 of the complex of structures encompassing fifty-five acres and designed to house up to 500 officers and men. The main warehouse was planned as an exact duplicate of the warehouse at Dayton, Ohio. The depot acted as a distribution point, with raw materials necessary for the function of an air service being gathered and sent to production facilities, while finished products were stored and the parts distributed to flying fields as needed. At one point, approximately 13,000 motors were stored there. Although the depot mainly supplied equipment to flying fields in the …

aka: Port of Little Rock

The Port of Little Rock, part of the McClellan-Kerr Arkansas River Navigation System, is operated by the Little Rock Port Authority (LRPA). The LRPA oversees the port, which provides intermodal transportation services to connect U.S. markets to the deep-water ports of the Gulf of Mexico. The port encompasses an industrial park located along the banks of the Arkansas River, approximately seven miles from downtown Little Rock (Pulaski County); the 2,600-acre industrial park has more than forty businesses. The Port of Little Rock operates two river terminals (a river port and a slackwater harbor) and a short-line railroad, as well as Foreign Trade Zone 14. (Foreign-trade zones are designated locations in the United States in which companies are able to delay …