Entry Category: Land - Starting with B 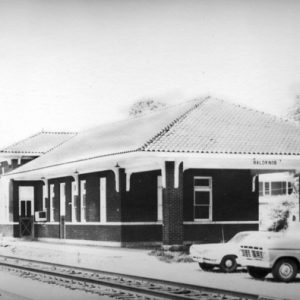 The Bauxite and Northern Railroad (B&N) is a short, three-mile railway built in 1906 by a subsidiary of Alcoa called the American Bauxite Company in what is now Bauxite (Saline County). The B&N transports hundreds of tons of alumina, a key ingredient in the production of aluminum, from the former Alcoa processing plant to Bauxite Junction, where the B&N connects with the Union Pacific. In 2012, the Bauxite and Northern Railroad and its parent company at the time, RailAmerica, Inc., were purchased by Genesee & Wyoming Inc. Bauxite deposits were discovered outside Little Rock (Pulaski County) during road construction in 1887 and were publically identified by State Geologist John C. Branner in 1891. In 1900, Colonel John Rison Gibbons and … Roswell Beebe was the first benefactor of the city of Little Rock (Pulaski County); the town of Beebe (White County) was named after him. In the late 1840s and the 1850s, he was one of the most important businessmen and politicians in Little Rock. He donated several pieces of land to the city. Roswell Beebe was born on December 22, 1795, in Hinsdale, New York, to a wealthy English family. When he was seventeen, he talked his father into letting him go to New Orleans, Louisiana. He was behind the cotton bales with Andrew Jackson when the United States turned back the British at the Battle of New Orleans in 1815. Roswell was successful in several businesses. The 1832 New … The Ben Laney Bridge is located in Camden (Ouachita County). Spanning the Ouachita River, the bridge carries traffic from U.S. Highway 79 Business and Arkansas Highway 7. The bridge, which was constructed in 1947, was added to the National Register of Historic Places on June 9, 2000. Camden’s early economy was directly tied to its location as the head of practical navigation on the Ouachita River. As the major commercial center in southern Arkansas, it needed reliable infrastructure in order to continue to grow. However, the city did not have a bridge over the river for decades and, instead, utilized a ferry. During the Camden Expedition of 1864, a pontoon bridge was used by the Union army, while Confederate forces … The Black River Bridge is the name given to a historic bridge spanning the Black River in Randolph County. Built as part of U.S. Highway 67, the Black River Bridge was added to the National Register of Historic Places on April 9, 1990, and maintained by the Arkansas Department of Transportation. The Pocahontas (Randolph County) section of Highway 67 opened in February 1931. The confluence of Highways 90 and 115 with U.S. Highway 67 in Pocahontas required a bridge to provide for safe travel across the Black River. To begin the construction of a bridge, the State Highway Commission needed federal approval through the U.S. Congress and through the War Department. This approval was set in place to ensure that … Markers for Blue Star Memorial Highways, which honor members of the armed forces, are located along highways across the United States, including several examples in Arkansas. Members of the National Council of State Garden Clubs envisioned creating “living memorials” for members of the armed services who served during World War II, rather than monuments or buildings. The first Blue Star roadway was established in New Jersey in 1945 following work completed the previous year. A five-and-a-half-mile section of road was named Blue Star Drive, and dogwood trees were planted along the road. The state legislature designated the roadway a memorial and banned the posting of billboards along the route. The project was well received and approved by the National Council … Arkansas has seven railroad tunnels but only one highway tunnel. Named for the Arkansas Highway Commission director at the time of the tunnel’s construction, Bobby Hopper, the northwest Arkansas commission representative from Springdale (Washington County), the Bobby Hopper Tunnel is located on Interstate 49 in Washington County just north of the Crawford County line with its closest exit at Winslow (Washington County). U.S. Highway 71, once classified by Reader’s Digest as “one of the most dangerous highways in America,” includes a perilous stretch between Alma (Crawford County) and Fayetteville (Washington County) through the Ozark Plateau. Thus, construction of an alternate route was designed to make the trip safer, as well as reduce travel time. Approved in 1987 and completed in … The Bridge Street Bridge is a multi-span reinforced-concrete deck girder bridge that spans the former St. Louis Southwestern Railway (Cotton Belt) and St. Louis–San Francisco Railroad (Frisco) rail lines in Jonesboro (Craighead County). It was listed on the National Register of Historic Places on September 10, 2020. Although the Bridge Street Bridge was not the first bridge at this location, it was a large improvement over the iron and wooden bridge that formerly spanned the rail line. During the late 1920s and 1930s, the Arkansas Highway Commission embarked on a large-scale campaign to upgrade the state’s roads. As a result, many miles of roads were paved or rebuilt, and many bridges were built. It was a well-traveled route, as it … The Broadway Bridge was originally constructed in 1923 as a vehicular structure and replaced in 2017; it is one of six bridges linking the downtown areas of Little Rock (Pulaski County) and North Little Rock (Pulaski County). As the downtown areas of Little Rock and Argenta (present-day North Little Rock) developed in the 1880s, it became apparent that a toll-free bridge independent of the railroad bridges across the Arkansas River was needed. Some people supported the idea of a bridge at the foot of Little Rock’s Main Street, while others thought it should start at Broadway. After years of debate and a series of bridge commissions, the Main Street site was adopted, and the Groton Bridge Company of Groton, New … Butterfield’s Overland Mail Company carried the first successful overland transcontinental mail by stagecoach through Arkansas as it went from the Mississippi River to California. Though only running from 1858 through 1861, it was the longest stagecoach line in world history at approximately 2,812 miles and was a major factor in the settlement and development of Arkansas and the American West before the Civil War. Its two main routes ran through Arkansas, westward from Memphis and south from Missouri, connecting in Fort Smith (Sebastian County). Many sites in Arkansas, such as Butterfield Trails Village in Fayetteville (Washington County), still reflect the era of Butterfield’s Overland Mail Company. Before modern technology, the mail was America’s lifeblood. “Post roads” were created in the …