The Works Progress Administration (WPA), later called the Work Projects Administration, was the largest and best known of the federal work relief programs established by President Franklin Delano Roosevelt to combat unemployment and stimulate a national economy ravaged by the Great Depression. During the eight years of its existence, 8.5 million people nationwide received WPA paychecks totaling nearly $11 billion. In Arkansas, the WPA provided much-needed social services and infrastructure improvements, while its salaries supported thousands of families and the merchants who depended on their business.

The WPA began operations in Arkansas in July 1935. It carried on many of the functions of the earlier Federal Emergency Relief Administration (FERA) while emphasizing work programs to a greater degree than its predecessor. To reduce wasteful expenditures, every project required a local or state sponsor to pay part of the cost. Arkansas retained its former FERA director, William R. Dyess. After Dyess died in a January 1936 accident, one of his deputies, Floyd Sharp, became state administrator and held the post until the agency ceased operations in 1943.

The WPA Services Division provided jobs for people of many vocations within its programs. As part of the Federal Writers Project, former historians, writers, and other professionals researched and wrote Arkansas: A Guide to the State (1941), a compendium of contemporary and historical information on the different regions and largest cities of the state. Meanwhile, other employees interviewed former slaves living in the state for a national oral history project generally known as the Slave Narratives. In fact, Arkansas produced far more (756) of these valuable histories than any other state. Another “white-collar” project, as agency officials termed these projects, was the Historical and Cultural Records Inventory. This enterprise catalogued and indexed many important documents relating to local and state governments and selected private groups.

Most tasks, though, did not require extensive education. The School Lunch Program fed thousands of low-income children. Another initiative was the Commodity Distribution Program, in which WPA workers at state welfare offices handed out donated food and clothing to needy families, as well as supervised an early food stamp system. In still another project, the Adult Education Program sent instructors into white and black communities across the state to teach basic reading, writing, and mathematics. One group of teachers targeted the tenant farmers of eastern Arkansas, providing additional classes in home-related topics, including gardening and proper sanitation.

As important as these services were, the WPA is remembered most for the roads, bridges, and buildings constructed by its Operations Division. Road work accounted for the largest share of the budget. Government workers graded and spread gravel over thousands of miles of rutted dirt highways and streets. Boone County was a typical case. The $750,000 spent there paid for improving 105 miles of county roads and many of the streets in Harrison, the county seat. It also paid for resurfacing state Highway 14 and U.S. 62 through the town and building sidewalks for the business district.

Pulaski County received the most federal money in the state—$13.9 million. Next were Sebastian and Jefferson counties with $7 million and $2.6 million, respectively. Notable projects in or near the capital city included the Arkansas School for the Blind, the Pulaski County Hospital, and extensive improvements at Adams Field (now Bill and Hillary Clinton National Airport). Among the hundreds of other construction operations in the state were a 25,000-seat football stadium at the University of Arkansas (UA) in Fayetteville (Washington County); a stadium at Arkansas Agricultural, Mechanical, and Normal College (AM&N), now the University of Arkansas at Pine Bluff (UAPB); and armories for Arkansas National Guard units at Harrison and Jonesboro (Craighead County).

In 1939, mounting pressure from conservative Democrats and Republicans in the U.S. Congress to curb relief spending resulted in a Senate report detailing widespread mismanagement and patronage hiring on WPA jobs—much of it at the behest of senators and congressmen. Congress then reduced funding and placed the renamed Work Projects Administration under the oversight of the Federal Works Agency. Irregularities in administration remained ubiquitous, however.

By late 1941, the budgetary demands of preparing for war had forced most programs to end. The effects of these actions were less painful than would have been the case earlier, however, due to the increased employment in private industry caused by defense spending. In June 1943, the WPA closed its books, having expended almost $117 million of federal money in Arkansas, along with $36 million from local and state sponsors.

The following WPA-built properties are listed on the National Register of Historic Places: 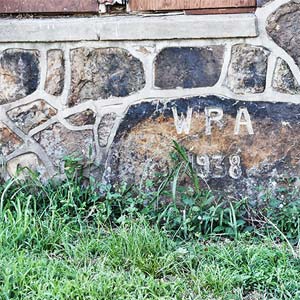