Wayland Holyfield is a prolific country music writer and recording artist who wrote one of Arkansas’s official state songs, “Arkansas, You Run Deep in Me.” He is a member of the Nashville Songwriters Hall of Fame and the Arkansas Entertainers Hall of Fame.

Wayland D. Holyfield was born in Mallet Town (Conway County) on March 15, 1942. He attended grade school in Springfield (Conway County) and Little Rock (Pulaski County) and graduated from Hall High School in Little Rock in 1960—after attending high school in Mabelvale (Pulaski County) during the Lost Year of 1958–59 when Little Rock’s high schools were closed. He attended Hendrix College in Conway (Faulkner County) on a basketball scholarship and then the University of Arkansas (UA) in Fayetteville (Washington County), earning a BA in marketing from UA in 1965. After graduating, he worked in sales and advertising.

During and after college, Holyfield played guitar and sang in groups called the Rebels and the General Store. Holyfield married Nancy Selig of Conway; they have three children. The couple moved to Nashville, Tennessee, in 1972 so Holyfield could pursue a songwriting career.

Holyfield has written and co-written many songs that have been recorded by famous musicians, including Anne Murray, George Strait, Brooks & Dunn, Julio Iglesias, Conway Twitty, the Oak Ridge Boys, and the Statler Brothers. His first Top 5 hit (co-written with Bob McDill and Chuck Neese) was “Rednecks, White Socks and Blue Ribbon Beer,” recorded by Johnny Russell. Two years later, in 1975, his song “You’re My Best Friend,” recorded by Don Williams, reached number one on the charts. Other notable songs that Holyfield either wrote or co-wrote include “’Til the Rivers All Run Dry” (1977), “Some Broken Hearts Never Mend” (1977), “Could I Have This Dance” (1980), “Only Here for a Little While” (1991), and “Meanwhile” (1999). The Grammy-nominated “Could I Have This Dance” is a popular wedding song.

Holyfield’s song “Arkansas, You Run Deep in Me” was commissioned by Arkansas Power and Light Company (AP&L) for Arkansas’s sesquicentennial in 1986; the song was adopted by the state legislature as one of Arkansas’s official state songs in 1987. Holyfield performed the song at President Bill Clinton’s inauguration in 1993. It was also used as a nightly sign-off theme in the 1980s and 1990s for the Arkansas Educational Television Network (AETN). Holyfield later donated the rights to the song to the Arkansas Community Foundation.

Holyfield has served as chairman and vice chairman of the Nashville Songwriters Foundation. Holyfield is also active in promoting the rights of songwriters, and he serves on the board of directors of the American Society of Composers, Authors and Publishers (ASCAP). 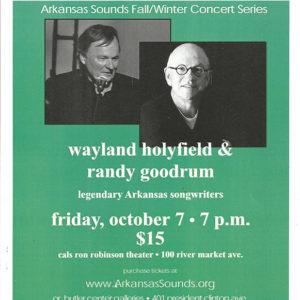