In 1926, M. E. Patterson of Little Rock (Pulaski County) incorporated Velvatex College of Beauty Culture, then known as Velvatex Beauty College, which was the state’s only approved beauty school for people of color. (A history produced by the school, however, lists its beginning operation year as 1929.) The school was founded after Patterson, who had often done hairdressing in her home kitchen, chose to teach others the skills of the trade in a more formal educational setting—and to help men and women become entrepreneurs. Patterson dubbed the school “Velvatex” because she believed African-American hair emulated the feel of velvet.

By the height of the Great Depression, many black-owned industries had taken a hit, but beauty salons were plentiful throughout black America. “The beauty industry had by the time of the Depression become so deeply entrenched in black communities that not even a global financial crisis could cause its demise,” writes Tiffany M. Gill in Beauty Shop Politics: African American Women’s Activism in the Beauty Industry. Velvatex’s establishment came at a time in which black businesses, including those centered on beauty and hair care, had begun to flourish. For instance, Madam C. J. Walker and Annie Malone, two notable black hair care pioneers, were building wealth through introducing hair care items and hair education that spread throughout black America. As Gill writes, “Beauty culture was not just a meaningful economic opportunity for poorer black women who were trapped in domestic labor but also a viable alternative for educated black women who found the more traditional middle-class professions still limited to them despite their credentials.” A 1951 advertisement for Velvatex that appeared in the Arkansas State Press, a black-owned newspaper managed by civil rights activist Daisy L. Gatson Bates, called the school “America’s Open Field for Opportunities.” The ad reads, “If you want to enter a profitable profession, unlimited opportunities with steady income and security, you owe it to yourself to consider: Velvatex College of Beauty Culture.”

In 1942, Patterson’s daughter, Ernestine Towns, joined the school as an instructor. For twelve years in a row after Towns joined in her role, all Velvatex students passed exams conducted by what was then the Arkansas Board of Cosmetology.

Longtime Velvatex instructor Mattie Woods, interviewed for a February 2019 Arkansas Times article, said that in the college’s earlier years, it was located on State Street near Philander Smith College. Advertisements listed the address as 1004 State St. In this location, it was a short distance away from West 9th Street, the center of the city’s black community, known for its black-owned businesses. Velvatex opened at its current location on Martin Luther King Jr. Drive in Little Rock in the mid-1950s.

In 1954, Towns became owner of the college, and its name changed to Velvatex College of Beauty Culture, the moniker it carries in the twenty-first century. Woods, who served on the cosmetology board, worked under both Patterson and Towns and by 2020 was the college’s longest-serving faculty member.

Velvatex had a reputation for being a strict learning environment. In the Times article, current Velvatex owner Barbara Douglas said, “You couldn’t come in with a spot on your shoes. You had white uniforms, white shoes. Your blouse had to be three-quarters; it couldn’t be down to your wrist. You couldn’t wear short sleeves. Your top had to come down over your hips. You just had to look like a lady.” These expectations were not unheard of among beauty culturalists. A 1919 textbook titled A Complete Course in Hair Straightening and Beauty Culture by B. S. Lynk referred to beauty as “duty,” a concept “adopted by beauty entrepreneurs who openly connected good grooming practices to moral character and economic advancement,” according to Gill. Plus, advertisements of the time encouraged black women to prepare a certain appearance and don certain hair styles—mainly straightened hair styles—in order to keep up with trends and achieve social acceptance in a society that viewed them as lesser.

Courses at Velvatex have covered subjects like shop deportment, salesmanship, and anatomy as part of the 1,500 hours students are to complete to earn a cosmetology license. An instructor’s license is also offered at the school. Throughout its history, Velvatex students performed styles on clients such as thermal presses, up-dos, finger waves, and roller sets. Styles taught reflected the trends of the time.

In 1977, Douglas began courses at Velvatex for her cosmetology license. She later returned to the college to earn her instructor’s license. In the mid-1980s, Towns asked Douglas if she would like to purchase Velvatex from her, and Douglas agreed. In 1994, Douglas became the owner of Velvatex, and she began managing it with her two daughters, Rachel Willis and Roberta Douglas, who are also Velvatex graduates. Willis became the chief operating officer and head instructor, and Douglas began serving as director of financial operations.

During the college’s walk-in hours each week, students serve members of the public and complete hairstyles like the roller sets and thermal presses that have been performed for generations; students also perform various braiding styles, hair coloring, and other techniques. Many Velvatex graduates have gone on to run their own salons and barbershops, create and sell wigs, and launch hair product lines.

In fall 2018, the college partnered with the Mosaic Templars Cultural Center’s exhibit titled Don’t Touch My Hair, which included items from Velvatex such as styled wigs, pressing combs, vintage textbooks, and a vintage manicurist’s table. 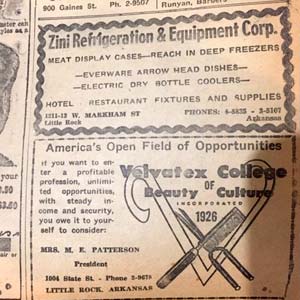