Louisiana Purchase through Early Statehood
The area that is now Van Buren County, nestled in the foothills of the Ozark Mountains, has been inhabited for roughly 10,000 years. Osage and Cherokee Indians are the first historic tribes known to have a connection to the area. Hunters from Ozark villages in southwest Missouri, and later in northeast Oklahoma, often visited the area, although they had no permanent settlements in the county. No official records are available to tell who the first European or American settlers were or where they came from, but indications are that they began making their way into the hill county in the1820s, settling in the area south of the Little Red River.

Perhaps the most important settler in this part of the county was John L. Lafferty, who came to Arkansas from Georgia. Lafferty owned a large plantation near where the three branches of the Little Red once ran together. This area, now covered by Greers Ferry Lake, was once known as “The Big Bottoms” and contained rich farmland. Lafferty was the guiding force in the creation of Van Buren County. Although these lands were parts of other counties at the time, the growing settlements in the area and the great distances to the other county seats necessitated a more localized government. Because Lafferty was one of the area’s most prominent and prosperous citizens, it was natural that he would take the lead. Through his efforts, Van Buren became a county on November 11, 1833. The county’s namesake was Vice President Martin Van Buren; it is not known why.

The first county seat was Mudtown—so named because any appreciable amount of rain resulted in ankle-deep muddy streets. Mudtown later became known as Bloomington. This community was near Lafferty’s home, and the county’s business was conducted in the home of Obadiah Marsh. Soon after the county’s formation, a one-room log structure, constructed by the men in the community in a “log raising,” served as the courthouse. The second-largest horseracing center in the state sat across the road, the largest being in Batesville (Independence County).

Van Buren County is hilly and rocky, few opportunities existed, and the area was far removed from the main transportation arteries. These factors diminished the interest of many prospective settlers heading west in the early 1800s. Settlers began migrating to the area when the government made land available at attractive prices after the Louisiana Purchase in 1803. Most of the initial newcomers came from the Carolinas, Georgia, Illinois, Kentucky, Mississippi, Missouri, and Tennessee.

Migration into the area increased when Arkansas became a state in 1836. Statehood may have made this wilderness area seem a little more acceptable to a man with a young family. Also, a financial panic swept across the nation in 1837, and many families lost their farms and most of their possessions. Families looking for a new start loaded their wagons and headed west.

The new migrants cleared timber and carved out portions of land to begin farming. These were usually small farms where cotton, corn, potatoes, oats, wheat, and tobacco were grown. Sheep were raised for the wool, and swine for meat. Family members tended most of these farming plots, but the 1850 census included 103 slaves in addition to the 448 families.

As the surge of people pushed westward, one apparent reason for settling in Arkansas in general and Van Buren County and other hilly areas in particular was the outbreak of swamp fever. Many who fled the dreaded disease looked to the high country for a new and healthier home. They also seemed drawn to areas that reminded them of their former homes, and the hills of Van Buren County appealed to many.

The county seat was moved to Clinton in 1842, and again a log-raising event produced a one-room courthouse. Several years later, a two-story white frame columned courthouse replaced the log structure.

Civil War through Reconstruction
County residents were divided in their loyalties to the North and the South in the Civil War. Many anti-secessionists were found in the hill country of Van Buren and surrounding counties. When the fighting broke out in 1861, there was pressure to support the Confederacy, with many local men joining area Confederate regiments, but others joined a secret peace society. Some of the members were Union supporters. Others were just looking for a way to protect their families and belongings from roving bands of guerrillas who raided, burned, and killed throughout the area. Some of these guerrillas had Unionist leanings, but many were just thugs taking advantage of the lack of law and order prevalent at the time. Members of the peace society were arrested and given the choice of joining the Confederate army or being tried for treason.

Irregular groups of supporters of both the North (jayhawkers) and the South (bushwhackers) were the primary perpetrators of the violence in Van Buren County. Bushwhackers burned the courthouse in 1865. The local Methodist church was used as a makeshift courthouse until a new two-story frame courthouse was erected in 1869.

Early Twentieth Century through the Modern Era
The county saw little industry or economic development until 1910, when the Missouri and North Arkansas (M&NA) Railroad came through and established a depot in the settlement of Shirley. This opened markets for merchants and farmers and especially for owners of virgin timberland. Shirley became the hub of the timber industry. Small-scale sawmills and timber operations existed before, but the railroad provided an efficient way to transport timber to large markets. The Shirley area initially prospered from the railroad, and the county’s population continued to grow slowly until the 1940s.

The Great Depression affected citizens in the county as it did in other parts of the state. Little money circulated, and a bartering system emerged. Farmers traded eggs and poultry to merchants for staples such as sugar and flour, and doctors were paid with whatever a farmer had to offer.

Programs such as the Works Progress Administration (WPA), the National Youth Administration (NYA), and the Civilian Conservation Corps (CCC) provided work and education for men in the economically depressed area. Many school buildings were constructed during the existence of these programs, and the county’s present native stone courthouse was constructed with the WPA’s assistance in 1934. Two CCC camps were organized in Van Buren County—Lost Corner, near the Van Buren–Conway county line, and Damascus, on the Van Buren–Faulkner county line. These programs not only provided employment for area men but taught farmers a new way of terracing crops to avoid erosion.

In the 1940s, in the aftermath of the Depression, people left the county in droves, an exodus that continued until 1960. The decreasing demand for cotton and the increasing need for fertilizer and insecticides drove most of the marginally profitable farms below the subsistence level, and many farmers left the area to look for work. During World War II, many people went to work in the defense industries in the North and on the Gulf Coast and the West Coast. At the end of the war, some returning veterans joined their families who had moved out west and up north to work in automotive plants.

About fifty African-American families joined the exodus, and, after 1960, only nine black families remained in the county. By 1969, none of them was actively farming, which had been their principal occupation.

In 1949, the M&NA abandoned operations in the county because of the dwindling supply of timber, removing the last major deterrent to the U.S. Army Corps of Engineers’s plans to erect a dam across the Little Red River to control flooding and generate hydroelectric power. Construction began just east of Heber Springs (Cleburne County) in March 1959 and was completed in 1962. The resulting lake, a major tourist attraction, extends about thirty-five miles west of the dam to Choctaw.

The lake brought many changes to the county. It displaced families and cemeteries, and it covered the villages of Choctaw and Eglantine, as well as the good bottom farmland along Choctaw Creek and the South Fork of the Little Red River. But much of the money from the government’s purchase of the land was reinvested in the county in the form of land purchases and business opportunities. The lake also brought recreational opportunities, an increase in residents and visitors, and increased land values.

In 1966, the first houses were built in the lakeside development of Fairfield Bay, which has become a popular retirement community. It lies mostly in Van Buren County and partly in Cleburne County. The influx of residents drawn to this community helped increase the county’s population significantly in the 1970s and 1980s.

Attractions
Along with the lake and the scenic hills, the National Championship Chuckwagon Races have become a tourist attraction. What began in 1985 as an eight-team race between friends at Dan Eoff’s ranch west of Clinton has grown into a major Labor Day event. Besides the races, there are shooting exhibitions, trail rides, cowboy clinics, music, dances, vendors, and food. About 135 racing teams and 25,000 visitors from throughout the country and Canada attended the 2004 event. 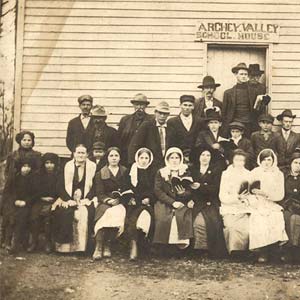