Siloam Springs is on the western edge of Benton County in what could be called the “bootheel” of the county. “Siloam” refers to the healing waters of the Pool of Siloam in the New Testament (John 9:6), and health seekers were once important to the local economy. The town is known for the beauty of the parks lining Sager Creek and for the diversity of its industries, which include poultry processing, canning, and a variety of light manufacturing. Siloam Springs is also the home of John Brown University, a private non-denominational Christian school offering fifty-one bachelor’s degree programs and six master’s degree programs.

Early Statehood
By November 1839, Simon Sager and family were living in what is now Siloam Springs, making them the first white settlers in the area. The first town here was Hico, established by Caldeen and Nancy Ward Gunter for trade with the nearby Cherokee Nation. “Hico” is a Cherokee word meaning “clear water” or “sparkling water,” referring to the springs flowing into Sager Creek. The Hico post office was established in 1855.

Civil War through the Gilded Age
During the Civil War, area citizens were victimized by regular and irregular forces from both sides and by outlaws who took advantage of this lawless time. It took several years for the local economy to recover.

In 1880, Hico merchant and former Union scout John Valentine Hargrove established Siloam City on land he owned in the valley along Sager Creek. Several factors led him to do this. The St. Louis–San Francisco Railway (Frisco) in eastern Benton County led residents on the west side of the county to think that they, too, would soon have a railroad. The pure spring water flowing into Sager Creek was said to be medicinal, and testimonials about cures attracted health seekers even before Hargrove platted his land into a town. Trade with the Cherokee Nation and farming continued to be important parts of the local economy.

When there was still no prospect for a rail line in Siloam Springs by the mid-1880s, many of those who made up the town’s initial population boom began to leave. By 1890, the population was 821.

The first major recorded flood of Sager Creek took place on May 13, 1892, causing three deaths and $20,000 in property damage. Several downtown businesses were damaged, and a few washed away. Mills and barns along Sager Creek were also damaged. Fred Wallace Bartell, a merchant and Methodist church leader, arrived in town after the floodwaters had receded. The town’s location along a creek in a valley makes it subject to periodic flash floods. Minor floods occurred in the 1920s, and the last major flood was in 1974.

As much as 1892 was a low point for the town, 1893 became a high point when the Kansas City, Pittsburg & Gulf Railroad began building south from Sulphur Springs (Benton County); this line was reorganized as the Kansas City Southern in 1900. To ensure that the line would pass through town, local businessmen led by Robert S. Morris of the Bank of Siloam pledged $20,000 to the railroad, half when the first passenger train arrived and the rest six months later. They also secured land for the depot and ten miles of right of way for the track. On December 20, 1893, the railroad reached Siloam Springs; most of the buildings in the downtown historic district were built between this date and the beginning of the Great Depression.

By 1900, Siloam Springs was a summer health resort with city-owned water and electric services and a telephone company. The apple industry was thriving, and peaches, strawberries, and other fruit crops were also grown commercially. Public school was available for grades one through eight, and officials expected to add high school grades soon.

On January 1, 1908, the Arkansas, Oklahoma & Western Railroad was completed from Rogers (Benton County) to Siloam Springs. This rail line provided shippers with the choice of using either the Kansas City Southern or the Frisco railroad to get their crops to market.

Gypsy Camp, a private summer camp for girls, was established in 1921 along the Illinois River. Camps were held until 1978, and the buildings now form a National Register Historic District.

During the Great Depression, government sponsored projects provided citizens with much needed income and brought the town a new and decorated post office, a community building, a high school, a fountain in one of the parks, and an improved road.

Modern Era
A local achievement that gained national attention was construction of Siloam Springs’ Memorial Hospital, which opened on December 19, 1950, in memory of citizens killed in World War II. Much of the material needed for this project was donated, volunteers did the labor, and all cash needed was raised locally so that no federal money was used—this was unusual enough to gain national attention.

In 1962, a bypass was built to carry traffic around the downtown. Arkansas 68 (now U.S. Highway 412) originally ran through farmland, but today, it is the main business area of the town. The route for a new bypass is under consideration.

Recent population changes have included a large increase in the Hispanic population, which stands at twenty-one percent as of the 2010 census. The second-largest minority is Native American at five percent. The lack of African-American population can be partially attributed to the fact that Siloam Springs was previously known as a “sundown town” and advertised itself as all white.

Attractions
There are two National Register Historic Districts within the city limits: downtown and Carl’s Addition, which is a residential area. JBU recently established an art gallery, and the Sager Creek Arts Center continues to exhibit art and host plays and workshops in its historic building downtown. The Siloam Springs Museum has been preserving and exhibiting the objects, photographs, and documents of Siloam Springs’ history since 1969. The town is also home to one of three Grand Army of the Republic monuments in the state.

Notable Figures
Alice Margaret Ghostley, an actress known for many roles and winner of a Tony Award, spent several years in Siloam Springs during her early childhood. 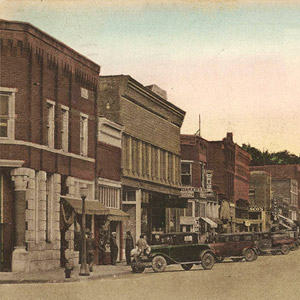 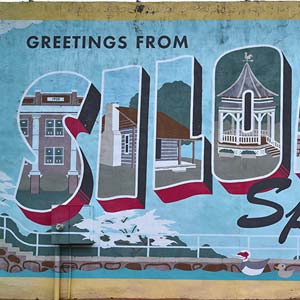