Because the state of Arkansas lacks a National Football League team, its college football programs draw a great deal of attention every year. As measured in print and broadcast media coverage and observed in vehicle decorations, the football team of the University of Arkansas (UA) in Fayetteville (Washington County), the Razorbacks, is the most popular. Although they have not enjoyed the kind of success achieved by similar programs in other states, such as Nebraska and Oklahoma, the Razorbacks continue to receive widespread fan support and attention every football season.

The football team of UA was founded in 1894. That same year, a contest was held to pick the new school colors, with cardinal red and white being chosen. UA’s first head coach was John Futrall, a Latin professor at the university. During their first year as a team, the “Arkansas Cardinals,” as they were then known, won two games against Fort Smith High School but suffered an overwhelming 54–0 defeat against the Texas Longhorns.

In 1908, Hugo Bezdek became the head coach for UA, and it is Bezdek who is credited for changing the team name from the “Cardinals” to the “Razorbacks.” After winding up a successful 7–0 season with the defeat of Louisiana State University, Bezdek reportedly said that his team had played “like a bunch of Razorback hogs.” The mascot for the football team became the Razorbacks for the 1910 season.

With the mascot change, the institution of one of UA’s most famous football traditions soon followed. Some sources record that in the 1920s, a group of farmers began calling to the Razorbacks football team in the same manner they would call their pigs home, trying to encourage the football team. The “hog call,” as it is known, soon became standard practice as the cheer for the Razorbacks: “Woo, pig, sooie! Razorbacks!” Other Razorback traditions include “running through the A”—the team taking the field by crossing through the A-shaped formation of the UA marching band before each home game—and the attendance at each home game by the Razorbacks’ live mascot, a Russian boar named Tusk.

In 1957, Frank Broyles became the Razorback head football coach, and he served in that capacity for nineteen years. Under Broyles, the Hogs had an 11–0 season and claimed to have won the 1964 National Championship, though this claim is highly disputed, as the Associated Press had already ranked the University of Alabama as the top team in the nation. A five-member committee of the Football Writers Association of America did name UA as number one following the team’s Cotton Bowl victory. In 1969, Coach Broyles’s number-two Hogs faced off with Coach Darrell Royal’s number-one Texas Longhorns in a game played in Fayetteville that became one of the Razorbacks’ most memorable games, dubbed “The Big Shootout.” The Hogs led 14–0 up until the fourth quarter, when the Longhorns came back to win the game 15–14. The Longhorns went on to win the National Championship. In attendance at the game were Billy Graham, who led the prayer, and President Richard Nixon. Broyles went on to win seven Southwest Conference titles with the Razorbacks before retiring as head coach in 1976 to become the athletic director for UA. Although African-American students had begun attending UA in the late 1940s, no black athlete was granted a scholarship to participate in the school’s football program until 1969, making it (along with the University of Texas) one of the last major college athletic programs in the country to desegregate.

In 1977, the new athletic director hired Lou Holtz to fill the head coaching job. Holtz remained head coach from 1977 through 1983. Four coaches combined to lead the team during the next fourteen seasons, in which the Razorbacks participated in eight bowl games but won only once. In 1997, Houston Nutt became the UA head coach, serving until 2007, when he resigned, citing a divided fan base, but also having been the subject of controversy later in his tenure. He was replaced by Coach Bobby Petrino for the 2008 football season. In April 2012, Petrino was fired for misleading the university with regard to having hired someone with whom he reportedly had an “inappropriate relationship.” In December 2012, it was announced that Wisconsin coach Bret Bielema would become the head coach of the Razorbacks. Bielema was dismissed on November 24, 2017, after completing five seasons with the Razorbacks. In December 2017, UA hired Southern Methodist University coach Chad Morris as the Razorbacks’ head coach, but he was fired in November 2019. The following month, UA hired Sam Pittman of the University of Georgia.

The Razorbacks play their home games in two separate stadiums during the season. Most of their home games are played at Donald W. Reynolds Razorback Stadium in Fayetteville. At one time, multiple games were played at War Memorial Stadium in Little Rock (Pulaski County); but in 2018, that was reduced to one game every other year through 2024. In October 2021, the Razorbacks played the University of Arkansas at Pine Bluff Golden Lions at War Memorial Stadium, the first time the Razorbacks had played an in-state team since 1944.

UA became a member of the Southwest Conference (SWC) in 1914, along with one of its major rivals, the University of Texas. The Arkansas-Texas rivalry diminished in importance after Arkansas left the SWC to join the Southeastern Conference (SEC) in 1990, playing their first SEC game in 1992. The Razorbacks are members of the SEC Western Division with the University of Alabama, Auburn University, Louisiana State University, University of Mississippi, and Mississippi State University. With Arkansas’s entrance into the SEC, their major rival became the Louisiana State University Tigers. The game between the Razorbacks and the Tigers is usually played the Friday after Thanksgiving. In this rivalry game, the two teams play for the “Golden Boot” trophy, a gold trophy in the shape of the states of Arkansas and Louisiana.

For additional information:
Bailey, Jim, and Orville Henry. The Razorbacks: A Story of Arkansas Football. Fayetteville: University of Arkansas Press, 1996.

McCoy, Matthew G. “From SWC to SEC: How the Arkansas Razorbacks Came to Join a New Conference.” Journal of the Fort Smith Historical Society 42 (September 2018): 42-47. 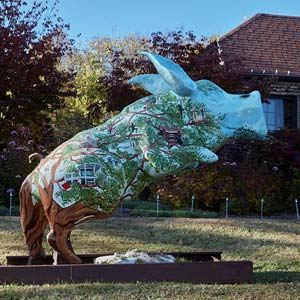