Ranaviruses are viral pathogens (double-stranded DNA viruses) that infect a broad diversity of at least 175 ectothermic (cold-blooded) vertebrates across the globe; they belong in the genus Ranavirus (RV) of the family Iridoviridae. The genus is composed of six recognized viral species, three of which—tiger salamander (Ambystoma tigrinum) virus (ATV), Bohle iridovirus (BIV), and the type species, frog virus 3 (FV3)—are known to infect amphibians. There are four additional genera of viruses within this family, but RV is the only one that includes viruses that are infectious not only to amphibians but also reptiles and wild and cultured teleost fishes. A study in 2016 found no occurrence of ranavirus in Arkansas in turtles of the eastern part of the state (Wapanocca National Wildlife Refuge) in areas resembling those with ranavirus occurrences in other states, while surveys on RV are badly needed on amphibians and reptiles of Arkansas.

For the most part, research on RV has been focused primarily on non-reptilian hosts, amphibians in particular. In the twenty-first century, however, reports of ranaviral infections of reptiles are increasing, with over twelve families of lizards and snakes currently susceptible to RV. However, in reptiles, the clinical signs and pathologies of natural ranaviral infection in these hosts can be highly inconsistent, and there is evidence to imply that reptiles can also serve as asymptomatic carriers of ranaviruses.

Often, the initial sign of an outbreak of RV is the sudden onset of illness and death in large numbers of amphibians and/or reptiles over a one- to five-day period. Clinical signs in amphibians include mild to severe skin hemorrhages (particularly near the base of the hind limbs and the opening of the cloaca), lethargy, buoyancy problems, gasping for air, weak or erratic swimming, and mild to severe fluid accumulation under the skin of the abdomen or hind legs. Ranaviruses can eventually lead to more serious systemic problems (necrosis or apoptosis) in the digestive tract, liver, and kidneys of primarily amphibians and are among the infectious pathogens that have been implicated in the global decline of amphibian populations. Gross pathologies at necropsy associated with RV infection include erythema, hemorrhage, limb swelling, generalized swelling, and swollen and friable liver. On occasion, the spleen is affected, and ulcers in the skin and palate may be observed. As its mortality rate can be near total, RV has the potential to eliminate entire populations if not controlled.

Although ranaviruses have been identified in at least sixteen species of frogs, one species of toad, and six species of salamanders, it also severely affects both captive and wild populations of some turtles and tortoises and has been reported in several lizards and snakes. Not as much information is available about RV in fishes, but the viruses have been linked to mortality in several species, including the endangered pallid sturgeon (Scaphirhynchus albus) and the three-spine stickleback (Gasterosteus aculeatus).

There is a plethora of information on the replication of this virus using FV3. Replication occurs at temperatures between 12 and 32 degrees C (54 to 90 degrees F). Initially, ranaviruses enter the host cell by a specialized form of active transport called receptor-mediated endocytosis. Subsequently, uncoated viral particles move into the nucleus of the cell, where viral DNA replication begins via a virally encoded DNA polymerase (an enzyme that synthesizes DNA molecules from deoxyribonucleotide). Then, viral DNA deserts the cell nucleus and begins the second stage of DNA replication in the cytoplasm, ultimately forming DNA in molecules made up of multiple copies of the same genome strung together in tandem (concatemers). Next, the viral DNA is packaged via a headful mechanism into infectious virions. Finally, the RV genome, like other iridoviral genomes, is circularly permuted and exhibits terminally redundant DNA.

Historically, the first isolation of RV was in the mid-1960s in the northern leopard frog, Rana pipiens. Since then, the ecological impact of RV cannot be underrated. The negative influence of RV on amphibian populations has been likened to the causative agent of chytridiomycosis, the chytrid fungus (Batrachochytrium dendrobatidis). In one study, the severity of disease outbreaks is thought to have increased due to climate change. In cultured fishes, RV outbreaks are of considerable economic importance in aquaculture, as epizootics can result in moderate fish losses or mass mortality events.

The transmission of RV is thought to occur by multiple routes, including: (1) contaminated soil, (2) direct contact, (3) waterborne exposure, (4) ingestion of infected viral tissues during predation, and (5) necrophagy or cannibalism. Because ranaviruses most severely affect amphibians in their immature stages (tadpole or larval), mortality events tend to be seasonal in the spring and summer whereas turtles appear to be most commonly affected by RV in the late summer and fall. Because ranaviruses are able to persist several weeks or longer outside a host, they are relatively stable in most aquatic environments and can likely survive for perhaps up to a year in watersheds under favorable conditions.

Ranaviruses capable of infecting reptiles have been found on all continents, except Antarctica. Aquatic reptiles may be more likely to be exposed to ranaviruses; however, ranaviruses have still been detected in terrestrial reptiles. In a 2013 study, it was reported that the use of moist microhabitats by hosts is correlated with RV detection, such as in eastern box turtles (Terrapene carolina). There are no documented cases of RV infections in vertebrates from the other groups of the class Reptilia, such as the Rhynchocephalia (tuatara, Sphenodon of New Zealand) and the archosaurs (crocodilians and birds). Interestingly, there remains ambiguity surrounding the taxonomy of some putative ranaviruses such as Singapore grouper iridovirus that is highly infectious to numerous marine fishes, and Santee‐Cooper ranavirus, first reported in 1995 in largemouth bass (Micropterus salmoides) from the Santee-Cooper Reservoir, South Carolina, both of which cause serious disease in fishes, and confusion continues with diseases caused by megalocytiviruses.

Concerning amphibians, there have been several mass mortality events since at least the early 1990s due to RV, including outbreaks in Asia, Europe, and North and South America. Interestingly, although ranaviruses have been isolated from wild amphibians in Australia, they have not, as of 2020, been associated with mass mortality on that continent. Confirmed cases of RV have been found in amphibians from the northeastern, southeastern, mid-western, and northwestern United States and in five Canadian provinces.

Humans have contributed to the global spread of ranaviruses, primarily though the global animal pet trade. For example, there have been some ranaviral disease outbreaks in private reptile collections and zoos. The true source of the global epizootic of disease caused by systemic iridoviruses in finfish and amphibians is presently uncertain; however, three possibilities have been suggested: (1) trade in food and ornamental fishes, (2) trade in reptiles and amphibians, and (3) emergence from unknown reservoir hosts associated with environmental change. Scientists have recommended a clean trade program for amphibians and other wildlife because health certificates that certify they are pathogen free are not required. Consequently, pathogens from wildlife are being transported around the world, creating opportunities for genetic mixing in captive facilities and spillover to wild populations.

To diagnose RV, laboratory examination of biopsies of suspected tissue samples (fixed in either 70 percent DNA grade ethanol or 10 percent formalin) and isolation and identification of the ranaviruses are used to confirm the disease. Positive confirmation requires histopathologic examination of tissues and a successful real-time polymerase chain reaction (qPCR) test. Less frequently, viral culture can be employed.

For treatment of patients with an acute ranaviral infection, several antivirals have been considered and tested. However, there are few examples of their successful use to treat clinical cases. One extensively studied antiviral in reptiles, acyclovir, does not appear to be an effective anti-ranaviral agent.

In Arkansas, a 2016 study reported no occurrence of RV in five species (61 specimens) of turtles of the eastern part of the state (Wapanocca National Wildlife Refuge) in areas close to, and habitats similar to, those in western Tennessee and other parts of that state where it has been found; however, the Mississippi River may have acted as a barrier to disease spread. In Oklahoma and Texas, RV has been found in several parts of these states in amphibians. Surveys on RV are badly needed on amphibians and reptiles of Arkansas; it is not a matter of if RV will be reported from the state, but when.

The Global Ranavirus Consortium (GRC) was formed to facilitate communication and collaboration among scientists, veterinarians, and others interested in ranaviruses. GRC is an organization dedicated to creating partnerships to combat the global emergence of ranaviruses. It organizes and hosts an International Symposium on Ranaviruses every other year, maintains an RV listserv, and produces a semi-annual newsletter.

Granoff, A., P. E. Came, and K. A. Rafferty. “The Isolation and Properties of Viruses from Rana pipiens: Their Possible Relationship to the Renal Adenocarcinoma of the Leopard Frog.” Annals of the New York Academy of Sciences 126 (1965): 237–255. 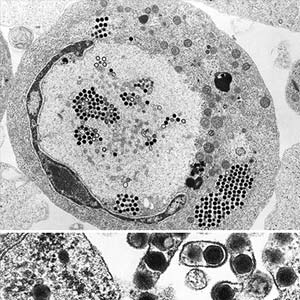