The steamboat Persian suffered a deadly boiler explosion on the Mississippi River near Napoleon (Desha County) in 1840, costing the lives of thirty passengers and crew members.

On the night of November 7, 1840, the steamboat Persian stopped near Napoleon to take on wood to fire its boilers. The vessel was about three miles below Napoleon when a boiler flue collapsed, releasing scalding steam and water that killed six people instantly and left dozens of others with dreadful injuries. The ship’s captain, described as “one of the best men of his vocation on the western water,” was asleep at the time of the accident. Several of the Persian’s firemen claimed that the pilot was drunk.

A passenger on another vessel that overtook the Persian after the explosion described the scene: “The sight we witnessed, on boarding the fated boat, was the most awful and distressing I ever beheld. The large and spacious cabin of the ‘Persian’ was covered with the sufferers, and those beyond the pangs of pain; men, women and children of all ages. Many of them were entirely stripped of skin, and some of the flesh from their bones.”

Seventeen other crew members and deck passengers died the following day, and others died from their injuries in days that followed. The ultimate death toll of the Persian disaster is believed to be thirty people, including two young men who leapt from the deck of the doomed steamboat and drowned in the Mississippi River.

The Persian was towed to Napoleon, where it was determined that the collapsed flue was the extent of the damage from the accident and that the steamboat could continue after a couple of boilers were walled off.

One newspaper stated that “we believe the Persian, the Rienzi, and United States were engaged in racing. The result is known and thirty innocent persons have been hurried without a moments [sic] warning into the presence of their maker.” A more likely scenario, given the solid reputation of the Persian’s captain, came from the Times-Picayune in New Orleans, which reported that “the boat had stopped at a wood pile a short time before the collapse, but no steam was let off. To a surcharge of steam the catastrophe is attributed.”

The Persian catastrophe illustrates the dangers of steamboat travel in the nineteenth century. Boiler explosions had previously caused mass casualties on the Rob Roy in 1836 and would be responsible for future disasters such as the destruction of the J. Wilson in 1853, the Sultana in 1865, and the Miami in 1866. 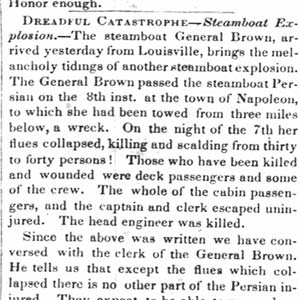 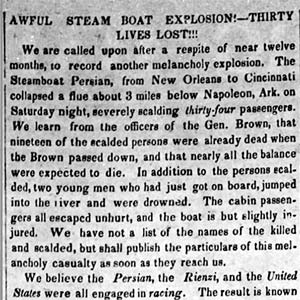