In 1901, the Arkansas General Assembly designated the apple blossom—Malus (Pyrus) coronaria—the official floral emblem of Arkansas, the second state to adopt the bloom (Michigan was the first). Governor Jeff Davis signed the resolution into law on February 1 that same year.

In 1900, the Arkansas Floral Emblem Society canvassed women’s groups to gauge sentiment for a choice of state flower or floral emblem. The holly, honeysuckle, passionflower, cotton boll, and apple blossom were considered. Some opposition to the apple blossom was voiced on biblical grounds, citing the apple’s role in Adam and Eve’s expulsion from the Garden of Eden and, conversely, the passionflower’s folkloric identification with Christ’s suffering. Although the Arkansas Federated Women’s Clubs (now the General Federation of Women’s Clubs) supported the passionflower, the apple blossom was championed by Love Barton, head of the Searcy (White County) chapter of the Arkansas Floral Emblem Society. Barton wrote letters to local papers and an article for the Arkansas Gazette in support of the apple blossom. The importance of the apple as a cash crop bolstered her case: 400 varieties were grown in Arkansas, and its apples had won blue ribbons at the Chicago Exposition of 1893 and the Paris Exposition of 1900. According to an account by Jane Kinley, Barton’s great-granddaughter, based on a scrapbook kept by Barton, she concluded her lobbying by taking a bushel of polished Arkansas apples to the Senate chamber on January 30, 1901.

The apple blossom remains the state’s floral emblem despite the apple’s decline in importance as an Arkansas market crop. In 2003, Arkansas ranked thirty-second in apple production. Arkansas’s 900 acres of orchards shipped about 3.4 million pounds of apples in 2002, down from nearly 15 million pounds in 1985. Ninety-five percent of Arkansas’s commodity apples are destined for fresh-market sales; the rest are sold for processing. Despite its diminished economic significance, popular sentiment still favors the apple: in Lincoln (Washington County), the annual Apple Festival pays tribute to the fruit. 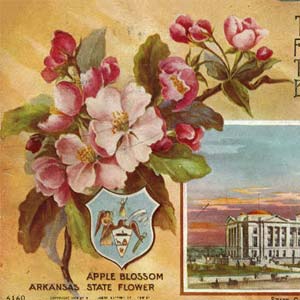