Leslie is situated in southeastern Searcy County amid the rugged Boston Mountains region of the Ozark Plateau. It was once a booming railroad and lumber city and one of the centers of industry in the Ozark region of Arkansas.

Louisiana Purchase through Early Statehood
The city was originally named Wiley’s Cove. According to some sources, this was in honor of Chief Wiley, said to be a Cherokee resident of Searcy County; however, it likely derived its name from one of the numerous whites named Wiley, Wilie, or Wily who were squatting in northern and central Arkansas in the early nineteenth century. The first post office in the county was established in 1842. In the 1850s, settlers Henry Begley and his brothers settled in the area, lending their name to the creek, Begley’s Creek, which runs through city. Early settlers engaged in hunting and subsistence farming as well as the raising of swine, which they drove to Little Rock (Pulaski County) to sell. Two subscription schools were started, though one source notes that they were primitive structures that compared poorly to “a respectable hog pen.”

Civil War through the Gilded Age
Though the area was largely spared military action during the Civil War, Searcy County was one of the hotbeds of activity for what became known as the Arkansas Peace Society, an anti-war organization that formed after Arkansas’s secession. In November 1861, Colonel Sam Leslie of the Forty-fifth Arkansas Militia was ordered to arrest county residents suspected of sympathies with the Union. During the war, both Union and Confederate forces recruited soldiers from Searcy County.

After the Civil War, the first public school district in Searcy County was established in the area. Wiley’s Cove was renamed Leslie in 1887; some sources claim the city took its name after Colonel Sam Leslie, who was also an early merchant, while others claim the city to be the namesake of his brother, “Old Jack” Leslie. The settlement was home to a post office, as well as four stores, a grist mill, and a flour mill before the railroad came in the early twentieth century.

Early Twentieth Century
In 1903, the Missouri and North Arkansas Railroad (M&NA) laid tracks through Leslie, and the first train rolled into the city on September 6, 1903. Later, the company built an engine shed, various shop buildings, and yard tracks at Leslie. In 1906, H. D. Williams Cooperage Company relocated its entire facility to Leslie from the city of Poplar Bluff, Missouri; this factory was soon advertised as the largest producer of barrels in the world. Among the workers H. D. Williams brought into Leslie were a number of African Americans, who lived in a section of Leslie called “Dink Town” in about sixty houses. The following decade, the Ed Mays Manufacturing Company also opened a stave mill in Leslie. There were also established hub plants and handle factories.

Newspapers proliferated in Leslie during the first two decades of the twentieth century. The Leslie News was established in 1903. The Leslie Banner soon began publication, though it proved short lived, as did the Leslieite, which folded in 1912. That same decade, the Trail Blazer began printing, later changing its name to the Leslie Herald. The growing city was also home to a number of hotels and banks; the first bank in the city was Farmers Bank, established in May 1905. A rolling mill was also built to handle locally produced wheat.

In 1912, the M&NA moved its machine shops to Harrison (Boone County). Later that same year, fire destroyed a large portion of the H. D. Williams Cooperage Company plant, and it was rebuilt on a smaller scale. The prosperity that brought so many people to Leslie in the early years of the twentieth century did not last much beyond the 1920s. In 1921, irate M&NA employees led a strike in protest of wage cuts. Leslie was one of the cities hardest hit by this strike. The strike carried on through 1922 and January 1923, prompting the rise of local affiliates of the Ku Klux Klan (KKK) to attack the strikers. The Klan helped bring the strike to an end, but Leslie’s industrial base was already in decline, with mills employing more than 700 people closing, including H. D. Williams. However, the Klan did remain popular in Leslie, and a joint meeting of Leslie and Marshall (Searcy County) klaverns in July 1923 attracted more than 300 Klansmen. The closure of the mills, perhaps combined with the rise of the KKK, resulted in the overwhelming outmigration of African Americans from Leslie; from a high of 104 in 1910, the number of black residents dropped to twenty-four in 1920 and one in 1930.

The city of Leslie was already in steep economic decline by the time the effects of the Great Depression could be felt there. Many local residents turned to hunting to supplement their diets. The Works Progress Administration (WPA), a New Deal program, did bring some relief to the city, aiding in the construction of American Legion Post No. 131. The National Youth Administration (NYA) led the building of a local park. The Rural Electrification Administration later brought electricity to the county.

World War II through the Modern Era
World War II drew away some Leslie residents. The M&NA ceased operations in 1946. By the early 1950s, the Bake Planing Mill, Chadwick Lumber Co., and Walter and Kane Hatchett Lumber Co. provided employment on a small scale. The area was also renowned for its cattle industry, being a major producer of whiteface Herefords. However, by 1960, Leslie was in clear decline. Mayor Dick Kimbrell led the city to participate in the Arkansas State Chamber of Commerce’s Community Development Program, which entailed a clean-up initiative to make the downtown area more attractive.

As of 2010, the city is home to a small medical center, a bed and breakfast, a lumber company, four churches, an antique mall, the Ozark Heritage Arts Center and Museum, and Serenity Farm Bread, a well-known bakery specializing in sourdough. Leslie also boasts numerous properties on the National Register of Historic Places, most dating to the first or second decade of the twentieth century. Among these are the Columbus Hatchet House, the Farmers Bank Building, the Leslie-Rolen House, the Meek Building, and the Missouri and North Arkansas Depot. 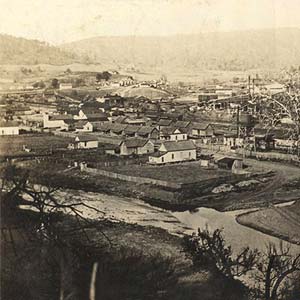 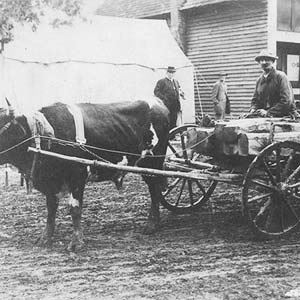