In 1966, John Paul Hammerschmidt, a native of Harrison (Boone County), became the first Republican elected to Congress from Arkansas since Reconstruction. He served Arkansas’s Third District for twenty-six years in Congress. His ability to relate to and serve the home population through effective casework management is perhaps his most lasting legacy.

John Paul Hammerschmidt was born on May 4, 1922, in Harrison to Arthur Paul and Junie M. Hammerschmidt. Hammerschmidt was the fourth of five children. Both sets of grandparents migrated to Boone County in the early years of the twentieth century and were of German descent. His paternal grandfather began the Hammerschmidt Lumber Co., which his father and later Hammerschmidt himself managed. Hammerschmidt’s family settled in a modest house on the outskirts of Harrison, and he attended public school there, graduating from Harrison High School in 1938 at the age of sixteen.

After graduation, he left home to attend the Citadel in Charleston, South Carolina. After one year at the Citadel, he received an appointment at the Naval Academy at Annapolis. He later requested and received a change in that appointment to allow him to attend West Point with a fellow native of Harrison one year later. During the interim period, Hammerschmidt entered the University of Arkansas (UA) in Fayetteville (Washington County) for the 1940–41 school year. While Hammerschmidt was visiting a friend in California, the Japanese bombed Pearl Harbor, and Hammerschmidt decided to start working at a naval yard to be more involved in the war effort.

Hammerschmidt then made the pivotal decision to forego West Point and join the Army Air Corps and begin pilot training. After pilot training, Hammerschmidt was commissioned as second lieutenant, and he promptly volunteered for missions overseas. He was assigned to the China-India-Burma Theater and headed for the Tibetan border. He flew 217 combat missions, most of which took place flying over the “Hump” (the eastern Himalayan Mountains). For his service in World War II, Hammerschmidt received four Distinguished Flying Cross medals, the Air Medal with four oak-leaf clusters, and three battle stars. Following the war, Hammerschmidt continued serving his nation in the U.S. Air Force Reserves (1945–1960) and the District of Columbia Army Reserves (1977–1981).

After his release from the army, Hammerschmidt continued his college career at Oklahoma A&M College, now Oklahoma State University. He was soon called home to take over the family lumber business due to an illness in the family. After moving back to Harrison, Hammerschmidt courted and married Virginia “Ginny” Ann Sharp of Bellefonte (Boone County). They married on October 11, 1948, and had one son.

Hammerschmidt led a relatively quiet life in Harrison from 1947 to 1966. He was active in the community, serving as city councilman from 1948 to 1954 and again from 1961 to 1962, and kept busy running the Hammerschmidt Lumber Co. He was also active behind the scenes in the Arkansas Republican Party. By 1966, Hammerschmidt was the chairman of the party and was actively helping Winthrop Rockefeller campaign for governor. The Republican Party needed a candidate to oppose Democrat Jim Trimble in the Third District and eventually asked Hammerschmidt if he would make the attempt to unseat this popular congressman, who was set on continuing his twenty-two years of service in Congress. Hammerschmidt agreed to run and made early efforts to maintain a campaign independent of the then-popular Win Rockefeller in order to direct his message to the voters of his district, though he continued to contribute his time to help with the gubernatorial campaign.

Hammerschmidt won the 1966 campaign by a narrow margin, getting fifty-three percent of the vote. He and Virginia moved to Washington DC, joining their son, who had previously moved there to attend prep school. Thus, the Hammerschmidts began a twenty-six-year co-residency in Washington DC and Harrison.

Hammerschmidt served on the Veterans’ Affairs Committee, the Public Works (Transportation and Infrastructure) Committee, and the President’s Committee on Aging. Included among his major accomplishments on the Veterans’ Affairs Committee is an excellent track record for veterans’ casework, as well as the initial introduction of a bill to create the Vietnam Veterans’ War Memorial. Hammerschmidt was always willing to intercede on behalf of current and retired servicemen and was known for his quick responses and consistent follow-ups.

As an active and later ranking member of the Public Works (Transportation and Infrastructure) Committee, Hammerschmidt was able to dedicate much effort to improving the nation’s (and Arkansas’s) highways and interstates. There are several highways and bridges named after him as testimony to his ability to get major projects funded and completed.

One of the most lasting and significant contributions Hammerschmidt made to Arkansas was his sponsorship of a bill that made the Buffalo River the nation’s first national river. This bill provided for the preservation of the Buffalo as a free-flowing stream and allowed for the eventual creation of a national park and a network of trails and campsites for visitors’ continual enjoyment.

Hammerschmidt achieved reelection to Congress with relative ease in his following twelve campaigns, with William Jefferson Clinton—then a young law professor at UA—coming the closest to defeating him in 1974. Hammerschmidt was in Washington DC during the majority of the campaign and was somewhat surprised at the intensity of the battle waiting for him when he returned to the district roughly ten days before the election to campaign in person. He was aware of Clinton’s charisma but counted on his constituency to pull him through, which they did.

After retiring from Congress in 1993, Hammerschmidt maintained an active lifestyle by serving on numerous boards and committees both in Arkansas and in Washington DC. From 1999 to 2004, he served on Arkansas State University‘s board of trustees. During the 1990s, Hammerschmidt received a BS and an MA from Canbourne University, an unaccredited online degree program.

His wife of fifty-eight years, Virginia Hammerschmidt, died on January 2, 2006. Hammerschmidt maintained an office at North Arkansas College in Harrison, and former constituents often called him for help and advice. In 2011, he received an honorary doctorate from the University of Arkansas.

Hammerschmidt died on April 1, 2015, in Springdale. 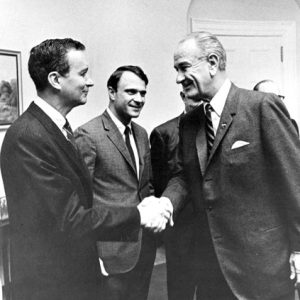