The Grand Prairie is a subregion of the Mississippi Alluvial Plain (commonly called the Delta) in eastern Arkansas that is known today as a major site of rice cultivation. Prairie County takes its name from this subregion. Located between the bottomlands of the White River and the Arkansas River, it was once a large, flat area of native grassland stretching across what are now Arkansas, Prairie, Lonoke, and Monroe counties, distinguished from the surrounding Delta land, which was largely swampy land dominated by bottomland hardwood. However, since the clear cutting of the Delta, the Grand Prairie is no longer as distinct a feature, though it remains agriculturally significant.

Native Americans inhabited and hunted upon the Grand Prairie; the Museum of the Arkansas Grand Prairie in Stuttgart (Arkansas County) features duck effigy pottery that dates to approximately AD 1100. Early American travelers and settlers took much note of the Grand Prairie, usually with an eye toward developing it. Thomas Nuttall described the prairie as having the potential for being a “truly inexhaustible” pasture land in his Journal of Travels into the Arkansas Territory during the Year 1819. Before it was settled, the Grand Prairie contained an estimated 900,000 acres of prairie. Among the grass species common in the area were big bluestem, little bluestem, and Indiangrass. Some settlers pastured their cattle there or cut the tallgrass to use or sell as hay, which was shipped as far away as Chicago, Illinois. Other settlers plowed the prairie land to plant cotton, corn, or wheat.

As the land was not ideal for cash crops such as cotton, and with the nineteenth-century Arkansas economy focused largely upon lumber and cotton, the Grand Prairie region lagged behind the rest of the state. However, this did not deter settlers—indeed, the Grain Prairie proved attractive to European immigrants who were then living in other parts of the United States. The town of Stuttgart was founded as a colony of German immigrants in 1878. In its early days, the residents primarily raised cattle and cut hay. In the 1890s, a group of Slovak immigrants established a colony at what is now the town of Slovak (Prairie County). These settlers, too, mostly cut hay until the advent of large-scale rice cultivation.

Beneath the topsoil of the Grand Prairie is a deep layer of dense clay that water cannot penetrate. The Stuttgart soil series, which is distributed over a large portion of the prairie, consists of a loam surface with a subsoil level typified by silty clay, giving the soil a slow permeability. This distinguishes it from the alluvial soils of the Delta region. Too, the prairie initially offered what seemed to be an endless supply of groundwater from the Mississippi River Valley Alluvial Aquifer. The land therefore seemed ideal for crops that require flooding, such as rice.

Small quantities of rice were grown sporadically in antebellum Arkansas; however, systematic rice cultivation in the state began on the Grand Prairie, initiated by William H. Fuller in 1897. Rice cultivation eventually proved not only feasible but also lucrative, thus spelling doom for much of the remaining native prairieland, which was promptly plowed for the planting of rice. By 1906, there were 4,000 acres of rice in cultivation, and the state’s first rice mill was constructed the following year. Farmers drilled wells to irrigate their fields, pumping vast amounts of groundwater out onto the land, as rice cultivation requires thirty-three inches of water during a growing season. Likely by 1916, farmers were pumping out more water than could be replaced by natural processes to irrigate 100,000 acres of rice. In the 1920s, the lowering of the aquifer’s level had become obvious, and the U.S. Geological Survey, at the urging of U.S. Senator Thaddeus Caraway, investigated the matter and published its findings in 1931, linking the depletion of groundwater to rice irrigation. Some farmers turned to pumping water from the Sparta Sands Aquifer, which lies below the Alluvial Aquifer. Federal incentives for agriculture during World War II only increased rice cultivation on the Grand Prairie.

With the Flood Control Act of 1950, Congress attempted to address some of the problems faced on the Grand Prairie by authorizing the U.S. Army Corps of Engineers to supply farms with irrigation from the White River. However, the plan has proven very controversial. In 1991, Congress authorized the Corps to develop the Grand Prairie Area Demonstration Project, which would consist of a pump and distribution system able to draw 100 billion gallons of water a year from the White River, with the aim of preserving the Alluvial and Sparta aquifers. However, court challenges from such groups as the National Wildlife Federation and the Arkansas Wildlife Federation, who contend that the project would threaten the White River National Wildlife Refuge and other ecosystems along the river, have put a hold on the project, though most of the infrastructure is in place.

Less than one percent of the original native prairie remains. Roth Prairie Natural Area and Railroad Prairie Natural Area, protected by the Arkansas Natural Heritage Commission, preserve some of the last surviving specimens of tallgrass prairie left in the Grand Prairie. 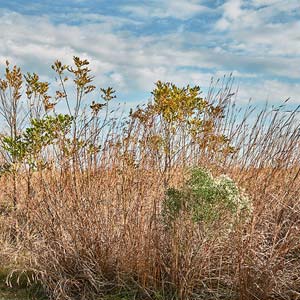