The Arkansas Governor’s Mansion, located on 8.5 acres on Center Street in the historic Quapaw Quarter of downtown Little Rock (Pulaski County), was established by an act of the state legislature in 1947. It was completed in January 1950 during Governor Sidney McMath’s term. Previously, Arkansas did not have an official residence for the governor of the state. The Governor’s Mansion Historic District is the area surrounding the Governor’s Mansion and was listed on the National Register of Historic Places in 1978.

In 1944, the Arkansas Federation of Women’s Clubs, led by its president, Agnes Bass Shinn of Harrison (Boone County), began a campaign for housing for the chief executive of the state. The first effort to obtain legislative funding for a governor’s residence, attempted in 1945, failed. Two years later, however, Act 257 created a Governor’s Mansion Commission with an appropriation of $100,000. The commission selected the site of the original Arkansas School for the Blind. That building had been torn down in 1939, and the bricks from it were saved. In December 1947, Governor Ben T. Laney laid the cornerstone of the new structure, and more than 300,000 bricks, including those salvaged, were used in the construction.

Construction lasted approximately two years and was supplemented by another $97,000, authorized by Act 401 of 1949. Many people played key roles in the planning, construction, and completion of the building, including Clyde E. Lowry, chairman of the Governor’s Mansion Commission; Frank J. Ginocchio Jr. and Edwin B. Cromwell, architects; Barney Ellis, contractor; and William R. Heerwagen, interior decorator.

Designed in a modified Georgian Colonial style, the three-story mansion is flanked by two colonnaded walkways that link the house to a guest house on the west side and an office on the east side. No formal ceremony marked the opening of the mansion on January 10, 1950. Instead, the public was invited to tour the new structure. During the week-long public open house, more than 180,000 visitors toured the new home. Governor Sidney S. McMath and his wife, Ann, began moving into the mansion on February 3, 1950.

The Governor’s Mansion has been the scene of many historic events in contemporary Arkansas history. During the administration of Orval Faubus, the house was the scene of many historic decisions involving the 1957 school desegregation crisis and the integration of nearby Central High School. It also served as transition headquarters between the time of Bill Clinton’s election to the presidency of the United States and his inauguration. Many well-known people have spent the night at the mansion over the years, including Harry Truman, Gregory Peck, and Carol Channing. The mansion was frequently seen on national television, as an establishing shot of the exterior front of the house was featured in the popular 1980s television sitcom Designing Women. Stock footage of the mansion was also used in an episode of 30 Rock in 2008.

The mansion and grounds have undergone many changes throughout the years. A tornado went through the mansion’s area in January 1999, barely missing the house itself but doing heavy damage to the grounds. This prompted the construction of new security fencing and the addition of the carriage house on the southwest corner of the property. Later, in 2000, during the administration of Mike Huckabee, the mansion underwent major renovation (primarily overseen by his wife, Janet Huckabee) with the installation of an elevator, the remodeling of the private quarters, and the extension of the front portico. The Grand Hall and connecting glass atrium were added on the south side of the house in 2002 and opened in the spring of 2003. Extensive landscaping by noted Little Rock landscape designer P. Allen Smith was added in 2007–08.

From the beginning, four rooms have been considered to be public areas: the state dining room, the foyer, the formal living room, and the library (or east conference room). The state dining room features the sixty-two-piece sterling silver service from the battleship USS Arkansas, which was donated to the ship by the people of the state in 1919. Also of special note are the antique Persian carpets in the state dining room and the living room. These were purchased by Governor Winthrop Rockefeller when he and his wife, Jeanette, did a redecoration of the mansion in 1967. They gave the rugs as a gift to the state when he left office.

The large chandelier in the foyer is an eighteenth-century French piece that was purchased by the state in 1950 to furnish the new executive residence, as were the Empire-style dining table, twenty-four Chippendale chairs, and antique Heppelwhite sideboard. The two camelback sofas, a pair of Martha Washington chairs, and a pair of wingback chairs were also purchased by the decorator to furnish the new residence.

The oldest antique piece in the mansion is the grandfather clock in the living room. It was made in 1770 in Waterford, Ireland. The clock was a gift in 1978 from the family of Francis Cherry, who was the second governor to live in the mansion.

The addition of the Grand Hall allowed for entertaining larger groups of people, as it can comfortably seat up to 220 people for a luncheon or dinner. The centerpiece of the room is the “Arkansas Chandelier.” It contains twenty-five lights and twenty-five stars, symbolic of the state being the twenty-fifth admitted to the Union; beaded crystal apple blossoms (the state flower); a beaded crystal honeybee (the state insect); bronze pine cones (the state tree); diamond-shaped crystal prisms symbolic of the state’s diamond mining history; and two large native crystal pieces mined in Garland County. On the floor of the hall beneath the chandelier is a wooden version of the official state seal, which was laser-cut using the wood of fifteen native hardwood trees. The Grand Hall staircase features a runner that has the names of the governors who have lived in the mansion woven into the center in ascending order of their service. The rug also contains the woven design of apple blossoms, the mockingbird (the state bird), the diamond shape, and twenty-five stars. An atrium space connects the Grand Hall to the main house. The combined square footage of the house, atrium, and Grand Hall is just over 30,000 square feet.

Doors on either side of the Grand Hall lead out to the landscaped gardens. A formal parterre garden with boxwood hedges, flower beds, and a fountain extend entertaining space outdoors when the weather permits. Other highlights of the mansion landscaping include a vegetable garden maintained by the Master Gardeners of Little Rock, an herb garden started by First Lady Betty Bumpers in 1972 and maintained by the Arkansas Unit of the Herb Society of America, a rose garden that produces seasonal cut flowers for the house, and the front entry garden with its centerpiece fountain.

Other buildings on the property are the Executive Protection Detail Building (east side of property), which was added in 2004 and houses the Arkansas State Police security detachment, and the carriage house (southeast corner of property) for storage and grounds maintenance, added in 2000.

In 2016, during a special session of the Arkansas General Assembly, legislation promoted by Governor Asa Hutchinson changed the terms under which the members of the Governor’s Mansion Commission serve, effectively eliminating its ability to make rules regulating the mansion and its grounds and allowing the governor to remove commission members before the expiration of their terms. That same year, the governor and First Lady Susan Hutchinson oversaw an $817,000 renovation of the mansion financed by a grant from the Arkansas Natural and Cultural Resources Council. 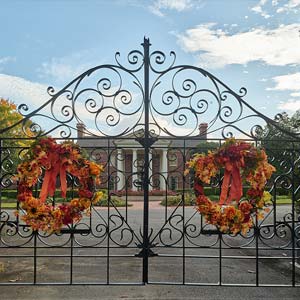