Dallas Tabor Herndon, father of the archival movement in Arkansas, was the first director of the Arkansas State Archives (previously called the Arkansas History Commission). From 1911 until his death in 1953, he labored tirelessly to preserve manuscripts and other material relating to Arkansas history and culture.

Dallas Herndon was born on August 28, 1878, the son of John Alpheus and Mary Mildred Brown Herndon, farmers who lived in Elberton, Georgia. He received his BS and MS degrees in history and political science from Alabama Polytechnic Institute (now Auburn University) in 1902 and 1903, respectively. After four years of teaching at Mobile and Auburn, Alabama, he entered the University of Chicago, where he worked toward a PhD in history and English with a specialty in “original research.”

In 1911, he moved to Little Rock (Pulaski County), where he became the executive secretary, and only employee, of the Arkansas History Commission. Although he received only a modest salary and had to work with an embarrassingly small amount of appropriated funds ($1,400 in 1911), Herndon developed an archival program for Arkansas housed in the state’s new capitol building. Here he also assembled artifacts, many still in the commission’s collections, for a popular State History Museum and put together a “gallery” of portraits and photographs of distinguished Arkansans.

During his long career, he authored many works on Arkansas history. His best known are his multi-volume Centennial History of Arkansas (1922) and Annals of Arkansas (1947). His Highlights of Arkansas History and Arkansas Handbook were long staple reference sources. His Why Little Rock was Born (1933) was the first published history of that city.

In 1951, increasingly infirm from a number of serious health problems, Herndon supervised the move of his treasured historical archives to the recently renovated Old State House in downtown Little Rock. Afterward, however, he was rarely able to visit his office. Early in 1953, the Arkansas History Commission named him director emeritus, forcing him into retirement. On February 21, 1953, despondent over his continued ill health, Herndon committed suicide at his home near Mount Vernon (Faulkner County). His body was cremated.

Who’s Who in the South and Southwest. Chicago: Marquis Who’s Who, 1950. 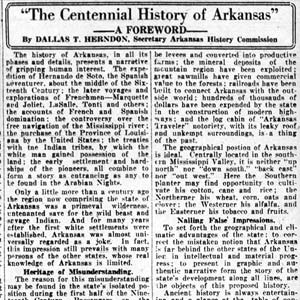