Crowley’s Ridge State Park in northeast Arkansas is a recreationally oriented park with a rich social and geological history. The park, situated on land that was homesteaded by nineteenth-century pioneer Benjamin F. Crowley, also preserves the structures built by young men in the Civilian Conservation Corps (CCC) during the 1930s.

Arriving on the scene in 1820, Crowley was the first prominent white settler in the region. He selected the site for his plantation home because of the upland terrain and a spring, which continues to flow today. Crowley, a veteran of the War of 1812, became an acknowledged leader in northeast Arkansas and strongly supported the creation of Greene County on November 5, 1833. He died in 1842 at age eighty-four, and his gravesite is located within the park.

As a way of honoring him, his neighbors named the unique formation of rolling hills that stretch approximately 200 miles from southeastern Missouri to Helena (Phillips County) “Crowley’s Ridge.” The ridge, rising 450–550 feet in elevation out of the surrounding flatlands, is a rare geologic formation that has served as a recreational retreat since recorded time.

Because of the spring and tree-shaded grounds at Crowley’s homestead, the site became a traditional summer campground, picnic site, and gathering place. Thus, it was the first choice of area residents when the state started accepting lands for public parks. Belle Hodges Wall, secretary of the Paragould Chamber of Commerce, led a successful campaign to make Crowley’s home site a state park. It was accepted into the fledgling system on July 21, 1933, and became the fourth of Arkansas’s state parks.

In October 1933, the first detachment of Civilian Conservation Corps workers arrived. Composed mostly of young men from northern Missouri, the unit was soon enlarged to 207 enrollees. They built foot trails, bridges, cabins, a pavilion/bathhouse, picnic sites, campgrounds, miles of roads, and a 300-foot earthen dam for a three-and-a-half-acre recreational lake.

The park was dedicated on June 21, 1937, but public use of the facilities started more than two years before construction was completed. On July 4, 1935, an estimated crowd of 8,000 visitors crowded the unfinished park.

Very few changes were made in the park during its first four decades. However, in the late 1960s and through the 1970s, several additions were made, including four new cabins, modern campgrounds, and day-use facilities. In 1992, four CCC structures within the park—a bridge on main park road, a bathhouse, the CCC Comfort Station, and the Group Lodging Area Dining Hall—were placed on the National Register of Historic Places. Several restoration and improvement projects have been done at the park since the passage of Amendment 75 in 1996, including paving roads near Walcott Lake and parking areas near the CCC Pavilion, renovating bathhouses and restrooms, rebuilding the CCC comfort station, and conducting an archaeological survey of Shiloh Cemetery. Renovations on the Group Lodging Area Dining Hall began in 2013; the renovated hall reopened in November 2014. 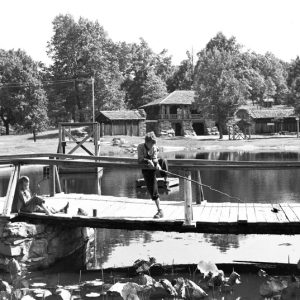