Coal fields in Arkansas are located in the Arkansas River Valley between the western border of the state and Russellville (Pope County) an area only about thirty-three miles wide and sixty miles long. Until about 1880, most coal mined in Arkansas was used near its original location, often to fuel the fires of blacksmiths. Between 1880 and 1920, coal was Arkansas’s first mineral/fuel output, used especially for locomotives and steam-powered machines, as well as for heating homes and businesses. After 1920, oil and oil byproducts pushed aside the popularity of coal as a fuel, and mining of coal decreased. Much of the coal mined in Franklin County and Sebastian County around the year 2000 was used in the manufacture of charcoal briquettes for outdoor cooking. However, rising oil prices in the twenty-first century have led to increased interest in burning coal to generate electricity.

The thickness of the coal beds in Arkansas rarely exceeds nine feet. The fields are often small because the coal beds are lenticular and may have been folded, faulted, or eroded during or after deposition. Arkansas River Valley coals vary from low-volatile bituminous coal in the western portion of the area to semianthracite in the eastern portion. One of the principal advantages of Arkansas coal is that it gives off little smoke when it burns. Another advantage is low sulfur content as compared to many coals mined in the United States. Because of its high carbon content, Arkansas coal is a more efficient fuel than coal from other parts of the country—Arkansas coal has been rated at 13,000 to 15,000 BTU, as compared to 7,500 BTU for Pennsylvania.

The first recorded mine output in the state was 220 tons in 1848. A coal mine operating in Spadra (Johnson County) in 1840 filled eleven barges to be shipped to Louisiana; however, all eleven barges sank in the high water of the Arkansas River, and the coal was lost. By 1880, eighty percent of the coal mined in Arkansas came from Johnson County. Railroad installations and extensions in the late 1800s encouraged shipping of the coal, and this resulted in extensive coal mine development. In 1907, coal mined in Arkansas reached a peak of 2.6 million tons. Over 106 million tons of coal were produced from 1880 to 2006.

Coal may have first been mined from strip mines or open pits. As production increased, it became difficult to mine the remaining coals near to the surface, and therefore underground methods were developed.One underground method was the use of slope mines, whereby the mining followed the slope of the natural coal bed, gathering and extracting the coal as the slope shaft continued to follow the coal bed. Steel tracks could be laid and the coal removed by coal carts pulled from the mine.If the use of a slope mine was ineffective, a vertical shaft might be dug from the surface to the coal bed; coal would then be extracted from rooms out from this shaft and removed by lifting it upward. All significant coal mining was by underground methods until 1918, when surface mining produced substantial amounts.

Among the dozens of coal mining companies formed in Arkansas in the nineteenth and twentieth centuries, several were owned by Franklin Backe and Heber Denman, including the Mammoth Vein Coal Mining Company of Sebastian County. Central Coal & Coke Corporation and the Southern Anthracite Coal Company were two other significant coal-mining companies.

At first, convict labor was used in Arkansas coal mining, but increasingly the mines depended upon immigrants from central Europe. Coal miners were strongly recruited by labor organizations, and, in 1903, every coal miner in Arkansas was required to belong to the United Mine Workers of America. Coal mines were, for a time, “closed shops” in which non-union workers were forbidden. Changing economic conditions led to labor unrest, most significantly in Sebastian County in 1914. The trouble resulted in a Supreme Court decision, Colorado Coal Company v. United Mine Workers of America (1922), which permitted legislation to oversee interstate commerce. The case actually continued in the courts until 1927 and resulted in “open shop” coal mines, a loss for the labor unions.

Principal coal mining in Arkansas has been located in Sebastian County (which accounts for fifty-five percent of total production between 1880 and 1976), Johnson County (seventeen percent), Franklin County (fourteen percent), Logan County (ten percent), Pope County (three percent), and Scott County (one percent). Coal mining was prevalent in the Franklin County area from the late 1880s to 1950. A metal statue of a coal miner, with lunch bucket and pick, was erected in Altus (Franklin County), and the names of many of the miners are on the adjacent stone columns. Another coal-mining commemorative site is east of the Sebastian County Courthouse in Greenwood, on State Highway 10. This site features a metal statue of a miner with a lunch bucket in hand and a coal cart that came from a local mine on tracks. Names of miners in the Sebastian County area are engraved on stone markers at the site.

By 2007, two mines existed in Sebastian County. One seeks to salvage coal deposits remaining after earlier mining operations, while the other is a new mine. The overwhelming majority of coal mined in Arkansas comes from Ferrell-Cooper Mining in Scott County. Coal deposits remain across the previously developed area, but recovery of the deposits may not be economical. 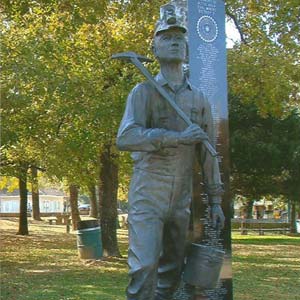